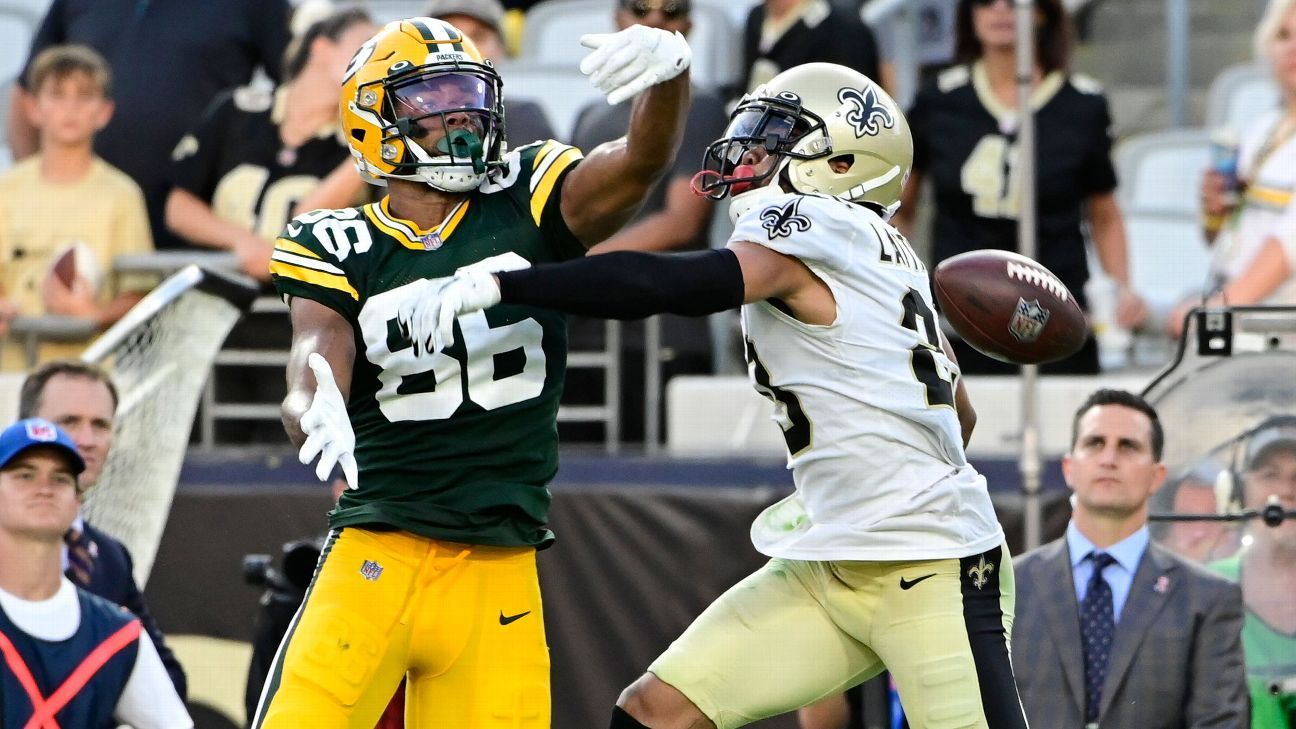 FORT WORTH, Texas — The New Orleans Saints‘ dominant Week 1 victory over the Green Bay Packers didn’t come without a price.

Seven Saints players missed Wednesday’s practice with injuries — including Pro Bowl cornerback Marshon Lattimore, who had thumb surgery this week, according to a source.

No timetable had been specified for any of the players on that list. However, NFL Network reported that both McCoy and Davenport are expected to miss games. The Saints signed veteran center Austin Reiter to their practice squad Wednesday, and quarterback Jameis Winston talked as if McCoy will miss some time.

“We’re gonna miss Erik,” Winston said of the standout third-year center, who left during New Orleans’ opening drive on Sunday. “His command and the way that he did things up front was phenomenal. But I know the way that he loves football, he’s gonna be in [replacement Cesar Ruiz‘s] ear, and Cesar’s gonna do an excellent job for us at that position.”

Ruiz, who was the Saints’ first-round draft pick in 2020, played center at Michigan before switching to guard with the Saints.

“Last year, me and Cesar worked so much together when he did play center,” Winston said. “I think that really helps. We have a good rapport. I know how he likes to communicate; he knows how I like to communicate. So it kind of worked out in our favor that we had a lot of reps last year, and we’re able to pick up from that.”

The Saints also have some good replacement options for Lattimore. They traded for Houston Texans veteran starter Bradley Roby last week — and Roby is now eligible to make his debut with New Orleans after serving a suspension in Week 1. Rookie third-round draft pick Paulson Adebo also proved capable as a starting cornerback in Week 1 when he intercepted Packers quarterback Aaron Rodgers.

The Saints are also still without star receiver Michael Thomas until at least Week 7 because of an ankle injury and standout defensive tackle David Onyemata until Week 8 because of a suspension, among others.

But defensive end Cameron Jordan spoke with confidence Wednesday about the defense’s ability to adjust to the players they replaced this offseason and the ones who might be out of the lineup because of injuries.

“It doesn’t matter who’s in, it’s about the mentality we take the field with,” Jordan said. “So hopefully there will never be a drop-off.”