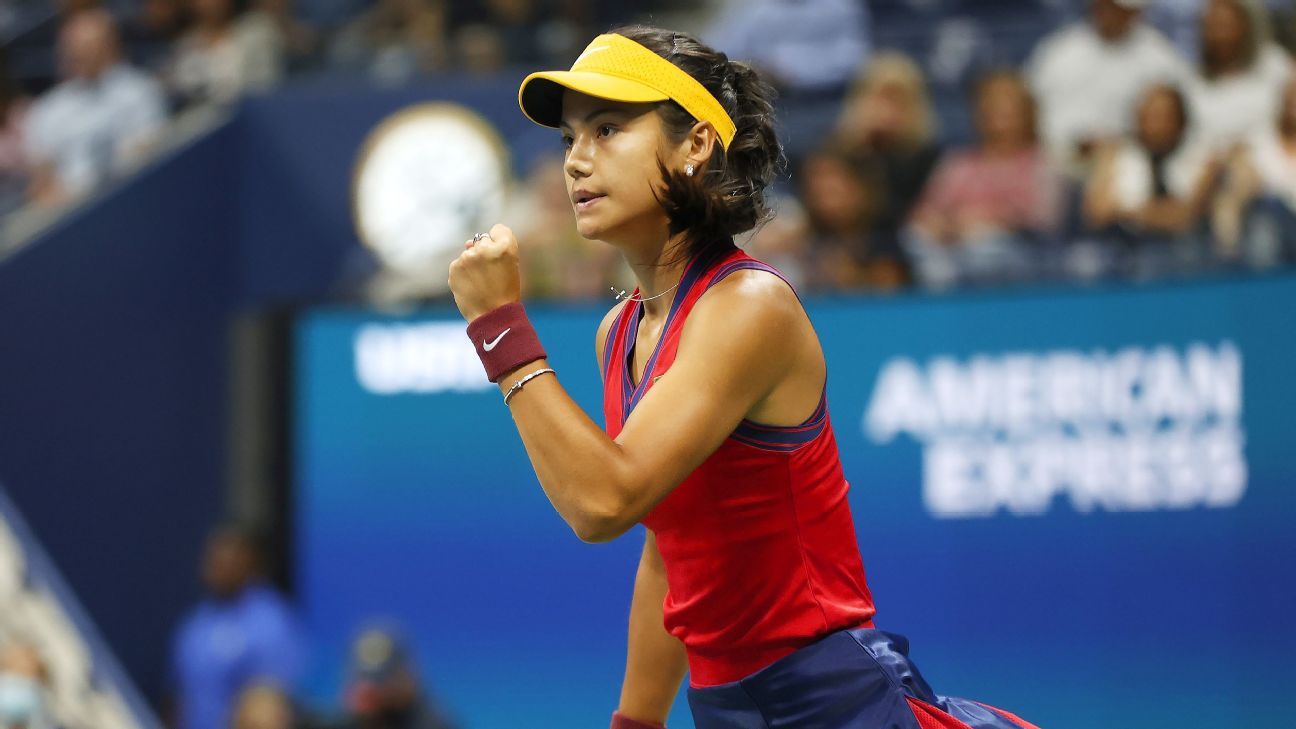 NEW YORK – It’s an all-teen title at the Arthur Ashe Stadium on Saturday after British teen sensation Emma Raducanu stormed her way into the US Open final, beating No. 17 seed Maria Sakkari from Greece 6-1, 6-4 in 84 minutes.

The 18-year-old Raducanu has not lost a single set — including qualifiers — on her way to the final. She is the first qualifier — male or female — to make any Grand Slam final.

“Honestly I think I played some of my best tennis today, especially here in New York,” Raducanu said at the news conference. “I knew I was going to have to be super aggressive. I managed to execute. So, yeah, I’m just really happy with today’s performance.”

In sensational Raducanu fashion, she served big and followed it up with deep forehand crosscourt returns for which Sakkari had no answers. Raducanu took an early lead in the first set, 2-0, and from that point won five straight games to take the first set 6-1.

The second set played out similarly, with Raducanu breaking Sakkari early to take the lead 2-1. Sakkari had moments when she looked in control with her big forehand returns, but she couldn’t break the teenager. Raducanu made it look effortless in the end, throwing her racquet down after smashing the final ball, smiling coyly and waving to the New York crowd.

“I’ve been taking care of each day and three weeks later, before you know it, I am in the final, and I can’t actually believe it,” Raducanu said during the on-court interview after the match.

“You guys have made me feel right at home. To play under the lights in Arthur Ashe stadium is an iconic moment.”

Sakkari, who has had an incredible tournament, beating 2019 US Open champion, Bianca Andreescu and then Karolina Pliskova in straight sets in the quarterfinals, was heavily favored to win the match.

The Raducanu vs. Sakkari match followed a thrilling three-set fight between the 19-year-old Canadian, Leylah Fernandez and the No. 2 seed, Aryna Sabalenka, which Fernandez won 7-6, 4-6, 6-4 in two hours and 21 minutes.

Raducanu’s ascension to the final of the US Open came out of nowhere. At the start of the 2020 Wimbledon, she was ranked No. 338 in the world. Then, she made the Round of 16 at Wimbledon in her first Grand Slam event. She had to play three qualifiers to make the main draw of the US Open. She beat world No. 41 Sara Sorribes Tormo, Shelby Rogers and Olympic gold medalist, Belinda Bencic en route to the final. As of next week, Raducanu is guaranteed to hit No. 51 in the WTA rankings.

“I personally think inside I knew I had some sort of level inside of me that was similar to these girls, but I didn’t know if I was able to maintain it over a set or over two sets. To be able to do it and play the best players in the world and beat them, I honestly can’t believe it,” Raducanu said.

Fernandez has also had a historic run at this year’s US Open, beating Naomi Osaka, Angelique Kerber, Elina Svitolina and Sabalenka on her way to her first Grand Slam final. The last time two teenagers played at the US Open was in 1999, when Serena Williams played Martina Hingis. Williams won the contest.

“Is there any expectation? I am the qualifier…there’s no pressure,” Raducanu said looking ahead to the final.

“It means everything to me to be here in the main draw first of all, then in the final of the Grand Slam, the US Open. I always had dreams of playing in Grand Slams, but I just didn’t know when they would come.

“To come this early, at this point in my career, I’ve only really been on tour for a month, two months since Wimbledon. It’s pretty crazy to me.”