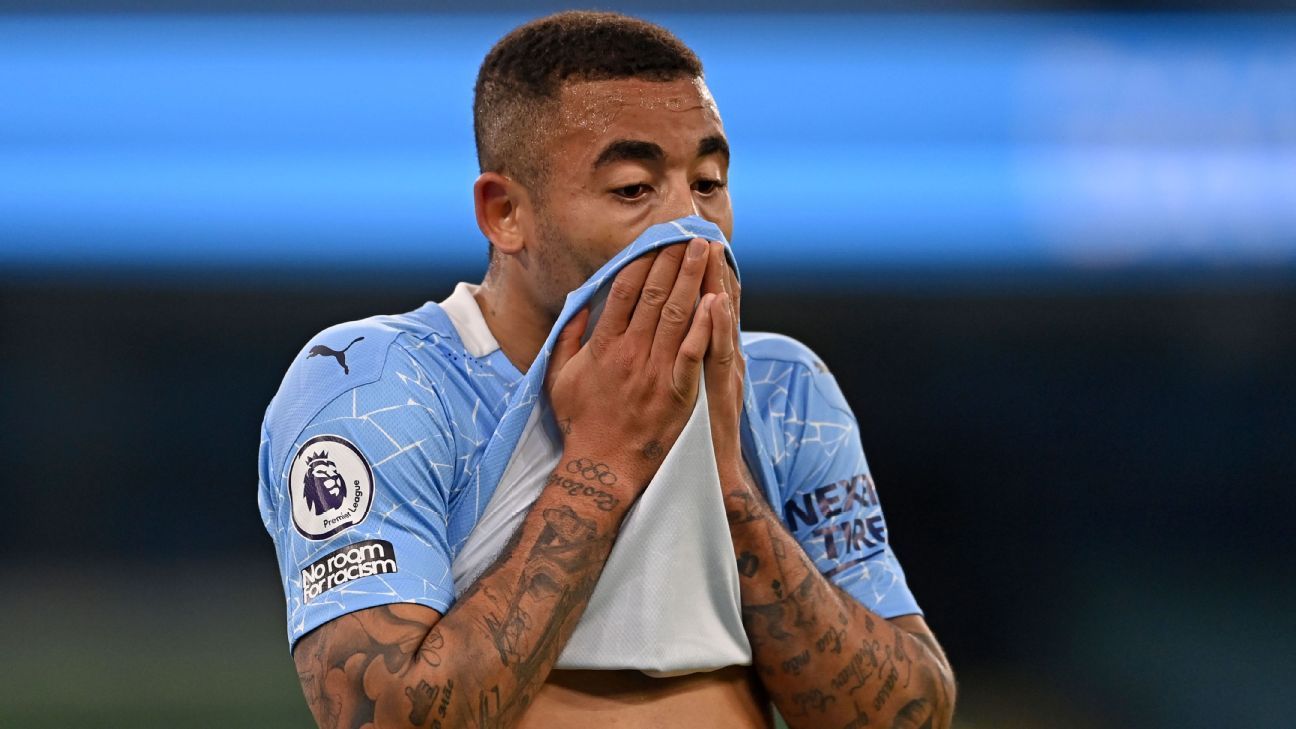 The January transfer window might seem like a distant memory, but that doesn’t mean the rumour mill has shut down! Speculation over summer moves is heating up, so check out the latest gossip below, and see all official deals here.

Brazilian striker Gabriel Jesus could join Sergio Aguero in leaving Manchester City in the summer with Pep Guardiola’s side interested in a move for Harry Kane or Erling Haaland.

According to the Daily Mail, the would-be English Premier League champions feel that Brazil forward Jesus can’t be relied upon in the big games. The 24-year-old has featured more regularly for City this season, scoring eight times in 25 league appearances, but could join Aguero on exiting the Etihad.

The lack of confidence shown in Jesus, who is circling on his third league title with City, means the club hierarchy could be expected to pay in excess of £100 million for replacements, with Kane and Haaland being two of the best performing strikers in football this season.

10.03 BST: Manchester United will do all they can to resist any bids for midfielder Donny van de Beek this summer, according to The Sun on Sunday.

That has led to speculation that his former club could make a move to re-sign him on loan for the 2021-22 season.

However, the 24-year-old held talks with Ole Gunnar Solskjaer recently, when the United boss made it clear that he still sees the Nethelrands international as part of his plans.

09.00 BST: Arsenal manager Mikel Arteta has revealed that the club will soon open talks with midfielder Emile Smith Rowe over a new contract.

Smith Rowe, 20, has enjoyed a breakthrough year at the Gunners, making 28 appearances. The England youth international has a contract with the club until 2023, but Arteta is ready to offer one of his brightest young prospects new terms in order to secure his future.

“We are going to have that discussion,” Arteta told Sky. “I think Emile has earned the right to look at that situation because of the performances that he has produced. He’s very much engaged and wants to continue with us, that’s for sure.”

– Everton are reportedly targeting a move for the aforementioned Sergio Aguero with the Manchester City forward set to be out of contract in the summer, according to the Daily Star. They report that the 32-year-old forward will be offered £240,000 per week to make the switch to Merseyside, though Carlo Ancelotti’s side will be competing amongst a host of clubs across Europe who are competing for the Argentine striker’s signature.

– Real Madrid could look to the Bundesliga in their search for a striker, with the Spanish giants interested in bringing Robert Lewandowski to the Santiago Bernabeu in the summer. That’s according to Sky Germany, who report that the 32-year-old is an option for Zinedine Zidane. The Poland international striker remains in hot form having scored 36 goals in 25 Bundesliga stars for Bayern Munich this season, and could be available for a fee of around £52m with his contract set to expire in July 2023.

– Paris Saint-Germain are considering making a move for 26-year-old Rodrigo de Paul. The attacking midfielder’s form is attracting interest from across Europe, but a fee for the Argentine could cost in the region of €40m, according to Gazzetta dello Sport. The Serie A man has contributed to 15 goals in 31 appearances so far this season, helping Udinese battle for a finish in the top half of the table.

– AC Milan are set to join the race for Tammy Abraham, with the forward beginning to attracting interest from clubs in Europe according to the Evening Standard. They claim that the Serie A club are ready to rival West Ham United for the striker who is valued at around £40m. The 23-year-old striker has scored six goals in 12 premier league starts this season, but hasn’t featured much in Thomas Tuchel’s plans of late.

– Paris Saint-Germain and Bayern Munich could be set to miss out on the signature of Lucas Vazquez with contract negotiations, with the 29-year-old edging closer to a new Real deal. That’s according to AS, who claim that the right-sided Spanish player is now set to be offered a new three-year deal worth up to €5m per year. Lucas has been a Real Madrid regular, registering an assist in El Clasico against Barcelona.