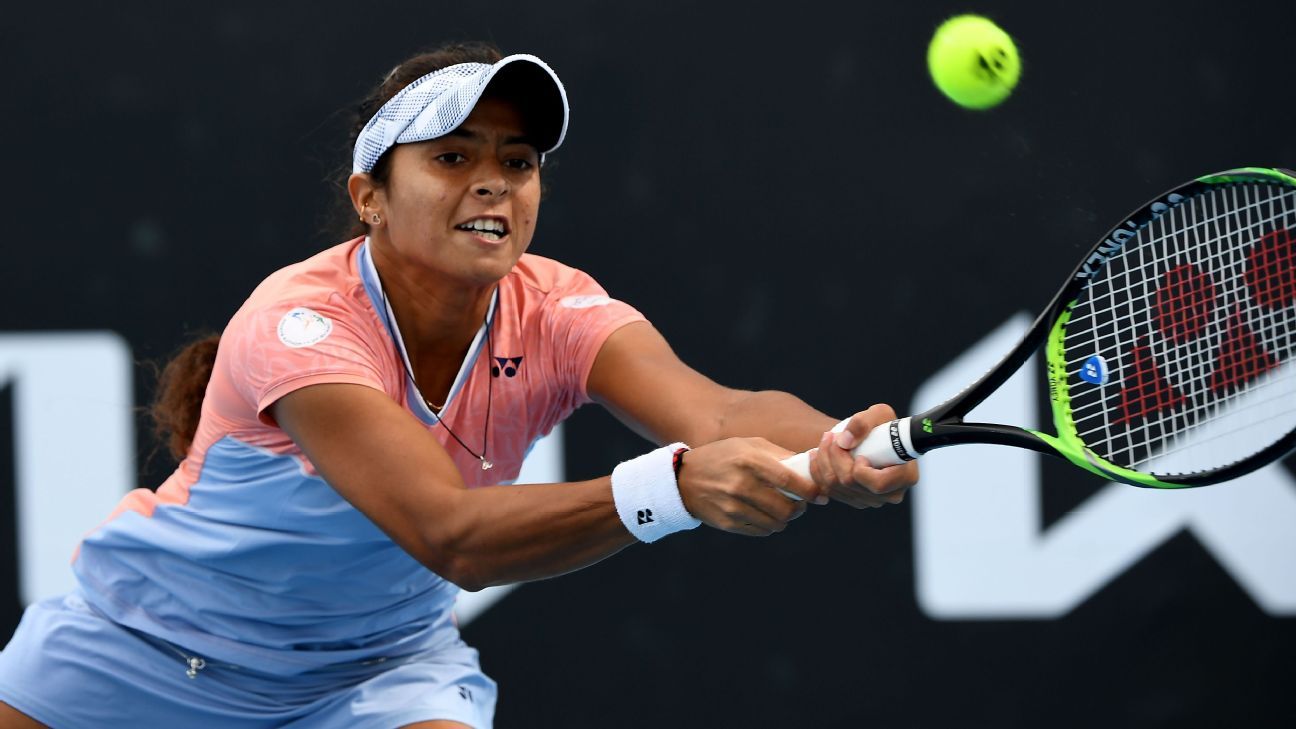 Jelena Ostapenko‘s stunning run to a French Open title four years ago had an unflattering stat hitched to it. 54 winners, 54 unforced errors. In 2019, she accumulated 145 unforced errors in just 20 matches. On Friday against India’s top singles player Ankita Raina, the former World No. 5’s high-risk, high-reward game yielded 77 unforced errors. Riding on them and the Latvian’s stuttering first serve, 174th-ranked Ankita came agonisingly close to pulling off a major upset in the World Group playoffs of the Billie Jean King Cup. World No. 52 Ostapenko, combustible in game and temperament, recovered after dropping a set for a 6-2, 5-7, 7-5 win in a match that lasted a little over two hours.

The tie is being played without spectators at the National Tennis Center Lielupe in the tiny resort town of Jurmala, Latvia. The sounds of the ball bouncing off the acrylic indoor hard court, of players running, skidding, lunging, of ball kids scurrying and the applause of a tiny band of team members on either side of the court seemed to be amplified to a sharp, hollow decibel level.

Ankita, who’s been picked to play three of the tie’s five rubbers, struggled with her serve, managing to hold only eight of 16 service games, none of which came in the first set. She was broken to love in the opening game and the unfortunate pattern continued until the first game of the second set. The 24-year-old Latvian, an unfazed baseline hitter, used her double-handed backhand and racket head speed to stymie Ankita in the first set and in the closing stages of the decider. Sandwiched between Ostapenko’s power hitting was the Indian’s resilience to chase down every ball, which had the Latvian imploding. Later, Ostapenko got a rub-down for a hip strain.

Hopes in the decider flickered bright for Ankita as Ostapenko piled on the errors, allowing Ankita to break back for 2-2. At 5-5, Ankita’s serve let her down and the Latvian brought her superior pedigree to bear for the win. Even after she’d wrapped the rubber and sunk into her chair, Ostapenko was shaking her head with a dour expression on her face, perhaps rattled by a relatively unknown Indian, whom she’d only watched YouTube clips of, giving her a close run.

Ostapenko was a touch condescending in her summation of Ankita in the post-match press conference. “I’m happy to win despite not playing my best. I knew she couldn’t play well for the whole match. She (Ankita) has a bit of an ugly game…she plays on ITF level and we are on the WTA,” Ostapenko said.

In the second rubber, Karman Kaur Thandi had some questionable umpiring to contend with after the Indian returned a ball that was called out. It turned out to be in after the Latvian called for a review, but instead of replaying the point, the umpire handed it to the hosts. Thandi fizzled out after a strong opening game against World No. 47 Anastasija Sevastova, leaving India trailing 0-2 after Day 1. Sevastova, who won 6-4, 6-0, takes on Ankita in the reverse singles on Saturday, while Thandi will face Ostapenko. The hosts now need to win just one rubber of the remaining three to win the tie.

A World No. 13 Latvia in their backyard, two opposition players of Grand Slam pedigree and a World Group qualifiers spot on the line, was always primed to be both daunting and freeing for a visiting Indian women’s team. Freeing, for the odds stacked against them and the pressure skimmed to a realistic minimum. In March last year, just as the pandemic had announced itself globally and the world was shutting down, the Indian women qualified for the play-offs through the Asia/Oceania Zone Group 1 tie for the first time ever. A historic sporting moment for India somewhat crowded out by a looming virus. A year since, the Fed Cup has been rechristened in honour of women’s tennis’ tallest trailblazer, but the virus and worrying lack of depth in Indian women’s singles still remain. This tie was pitched as a punching-above-weight story of foreseeable result for India. At least in Ankita, the team has had a plucky disruptor.