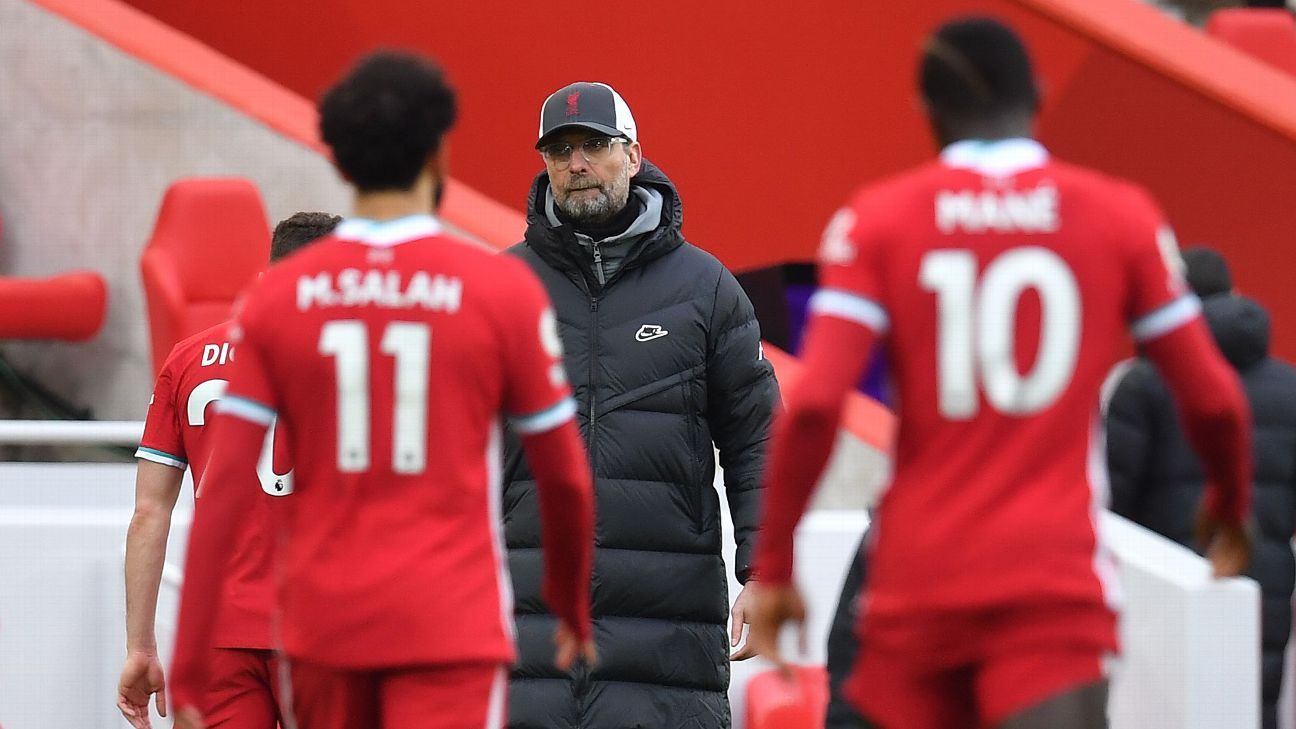 Reigning champions Liverpool slipped to eighth in the Premier League table on Sunday after stumbling to yet another embarrassing defeat at Anfield.

The Reds have now lost six games in a row at home with bottom-three Fulham the latest team to leave Merseyside three points — the Cottagers’ 1-0 win being their first at Anfield since 2012.

A solitary goal from Mario Lemina on the stroke of half-time was enough to seal Liverpool’s fate as a slew of chances went begging.

It is the first time Liverpool have lost six home matches in a Premier League season, and the first time they’ve succumbed to six home defeats in any campaign since 1953-54, when they were relegated after finishing rock bottom of the old first division.

Here are six aspects of the weekend result that everybody is still talking about.

Liverpool’s six consecutive defeats have come in the space of just 46 days, starting with a 2-1 loss against Burnley on Jan. 21.

They had previously gone four years and some 68 home league matches unbeaten before the surprise result against the Clarets saw the rot set in at what was once an impenetrable fortress.

Liverpool have lost six home games in a single Premier League season for the first time in their history.

They’ve all come in the past 46 days 🤯 pic.twitter.com/hc9idJ5i6s

2. What a difference a year makes

This time last year, Liverpool had just leapt 25 points clear at the summit of the Premier League by beating Bournemouth 2-1 at Anfield (back when such a thing felt like much more of a formality).

It was Klopp’s 22nd league win on the trot, thus breaking an English top-flight record that was originally set by Bill Shankly’s all-conquering Liverpool team of 1972.

The result took their points tally to 82 from 29 games, meaning the Reds are 39 points worse off last season’s pace, having played a game less.

It means that even if Liverpool win every single one of their remaining league games in 2020-21, they will still finish a whopping 26 points behind their incredible 2019-20 end-of-season title-winning total (99 points).

They may have produced a third successive blank at Anfield, but it’s fair to say that Liverpool did create a fair amount of goal-scoring opportunities against Fulham — they simply failed to convert them.

According to Opta, the Reds mustered 16 attempts at goal without successfully finding the back of the net.

Klopp’s side have now failed to score with any of their last 115 shots at Anfield in league games, which is the longest barren run by any side at home since Opta began accurately charting such things (in 2006-07).

115 – Following their 16 attempts this afternoon, Liverpool have now failed to score with each of their last 115 shots at Anfield in the @premierleague (ex. pens), the longest ever run by a side at home since we have exact times of shots available in the competition. Riddle. https://t.co/cyuijRhvZG

As if six home defeats in a row wasn’t bad enough, especially for defending champions, there are also a few more undesired “records” at play that further compound Liverpool’s misery.

For instance, the Reds are on an eight-game winless streak in the Premier League (0 wins, 2 draws, 6 losses) which is their longest in the English top flight for almost 70 years.

Not since 1952 have the club gone as long without winning a match at Anfield, when they drew six games and lost twice between Jan. 5 and March 15.

What has happened to Liverpool?! 😳 pic.twitter.com/Y4UJvqIulL

Defeat against Fulham was also Jurgen Klopp’s first-ever Premier League loss at home against a promoted side, having won 14 and drawn once in his first 15 outings.

Liverpool’s nine losses in their last 28 league games equals the total number of defeats from the previous three seasons combined.

They are also the first-ever defending English top-flight champions to lose six consecutive home league matches in the entire history of association football.

We can hardly blame them, but it’s fair to say Liverpool made rather a big deal about winning their sixth Champions League trophy in 2018-19.

As well as the image of Klopp sat on the parade bus counting “six” on his fingers, another abiding image of the celebrations was the German coach giddily singing down the camera during a post-match interview.

Indeed, Klopp’s hearty rendition of “Let’s Talk About Six, Baby” proved so popular among fans that his club trademarked the phrase for use on official merchandise.

Certainly a good job the club trademarked these phrases in 2019 pic.twitter.com/9jU2yUZfDp

Alas, given events in recent days, it’s unlikely that “SIX BABY!” t-shirts are going to be big sellers in the Liverpool club shop for a good, long while.

If recent Premier League history has taught us anything, it’s that when the plane banners start being trailed across the sky above your stadium — regardless of the message in tow — then all is most certainly not going well.

And the winner for worst plane banner in the history of football goes to… Liverpool! ✈️

Quick reminder that Liverpool lifted their first league trophy for 30 years a little over seven months ago.

This must surely rank as the quickest “title win to desperate plane banner” turnaround of all time?