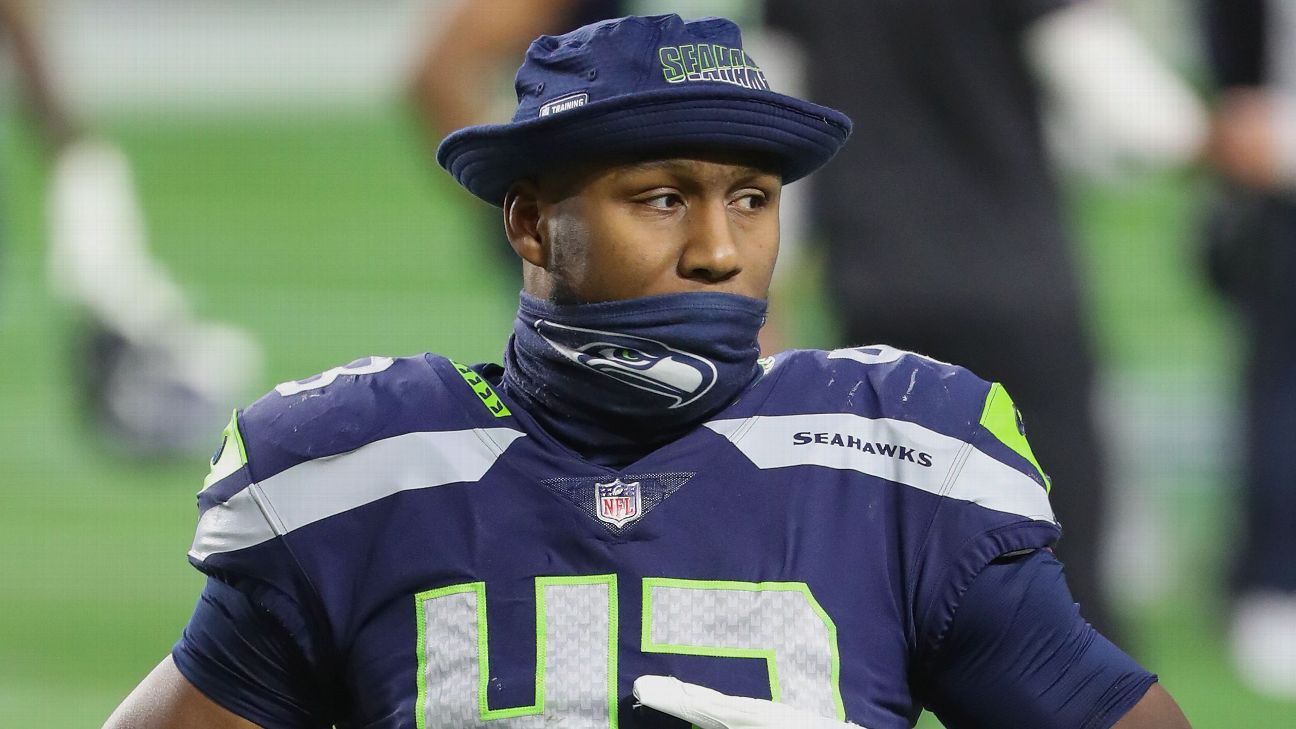 SEATTLE — The Seattle Seahawks could be in much worse shape with their salary cap as the March 17 start of free agency approaches.

Just look at how many teams are currently over the estimated spending limit for 2021.

The NFL has not announced an exact salary cap for next season but has told teams it will be no lower than $180 million. As things stand now, OverTheCap.com and Roster Management System have the Seahawks with less than $8 million in cap space, based on an estimated leaguewide cap that’s slightly above that $180 million floor.

That would cover only about half the cost of a franchise tag for cornerback Shaquill Griffin, let alone whatever it might take to keep any of Seattle’s other free agents or to make any outside additions.

In other words, general manager John Schneider and cap guru Matt Thomas have work to do to free up money before March 17, when every team’s top 51 contracts must be under the cap.

Defensive end Carlos Dunlap is the most obvious candidate. As good as he was after arriving in a midseason trade from the Cincinnati Bengals — five sacks and six tackles for loss in eight games — the Seahawks can’t afford the $14.1 million he’d count against their cap in the final year of his contract.

Lowering that number with an extension based off his current deal could be easier said than done for a few reasons. Start with Dunlap having already taken one pay cut to facilitate his trade from Cincinnati. As much as he likes Seattle, he might not be willing to sign an extension now that pays him anything less than that — without seeing what his value is on the open market — since it would amount to another pay cut.

And while the Seahawks could theoretically structure an extension that pays him that much in 2021 but with a lower first-year cap charge, that could require them to commit too much guaranteed money over the length of a deal for a player who just turned 32.

Cutting Dunlap would allow him to test the market for the first time in his career and give the Seahawks a chance to sign him to a more team-friendly deal, something they could negotiate from scratch as opposed to from $14.1 million. The lowered NFL salary cap will force other teams to make similar decisions with productive but high-priced players, so the Seahawks would likely have viable alternatives if they cut Dunlap and aren’t able to re-sign him.

He has a $3 million roster bonus due March 21. If he is cut — which seems likely — it would happen before then.

Prediction: Seattle cuts Dunlap and re-signs him at a lower rate.

The Seahawks’ current regime has been much less willing than other teams to treat contracts like ATMs, knowing that immediate cap savings created by a restructure will catch up to them down the road. But they’ve restructured deals before by converting base salary into a signing bonus (Doug Baldwin and Russell Wilson in 2017) and might have to do so this year.

Here’s a rough example of how that might work: They could convert $6 million of linebacker Bobby Wagner‘s $13.15 million base salary for 2021 into a signing bonus. That would clear a net of $3 million for 2021, as the $6 million bonus would be spread out over the final two years of Wagner’s contract for cap purposes. Wagner’s 2022 cap number would thus increase by $3 million, which is the long-term downside of such a move.

The negative cap ramifications would likely make the Seahawks less inclined to do this type of restructure again with Wilson, especially under the circumstances. Pushing more cap charges onto future years would make it more difficult to tag or extend him, since negotiations of that size are typically based off the tag. And it would add to the already-whopping amount of dead money the Seahawks would have to eat if they traded Wilson.

But as with Dunlap, creating cap space with an extension for those players is easier said than done. Will they want to give Lockett a big raise knowing DK Metcalf will soon be in line for a massive payday? Will they want to reinvest in Brown past his age-36 season? The Seahawks are optimistic that they’ll extend Adams at some point this offseason, but they might not be able to structure it in a way that provides significant cap relief for 2021.

Trading Wilson this offseason is unlikely for several reasons, including the $39 million in dead-money charges it would incur. A post-June 1 trade this year would spread out that dead money over the next two years and create $19 million in 2021 cap space, minus whatever Seattle would have to spend on his replacement.

There have been no indications that the Seahawks are looking to shop any of the other aforementioned names, so this is all hypothetical. But a trade of a player listed above could be doubly beneficial as it would shed salary and recoup needed draft capital and/or a player at another need position. Seattle has no first- or third-round pick and only four in all.

Prediction: Seattle makes a salary-shedding trade, but not with Wilson.