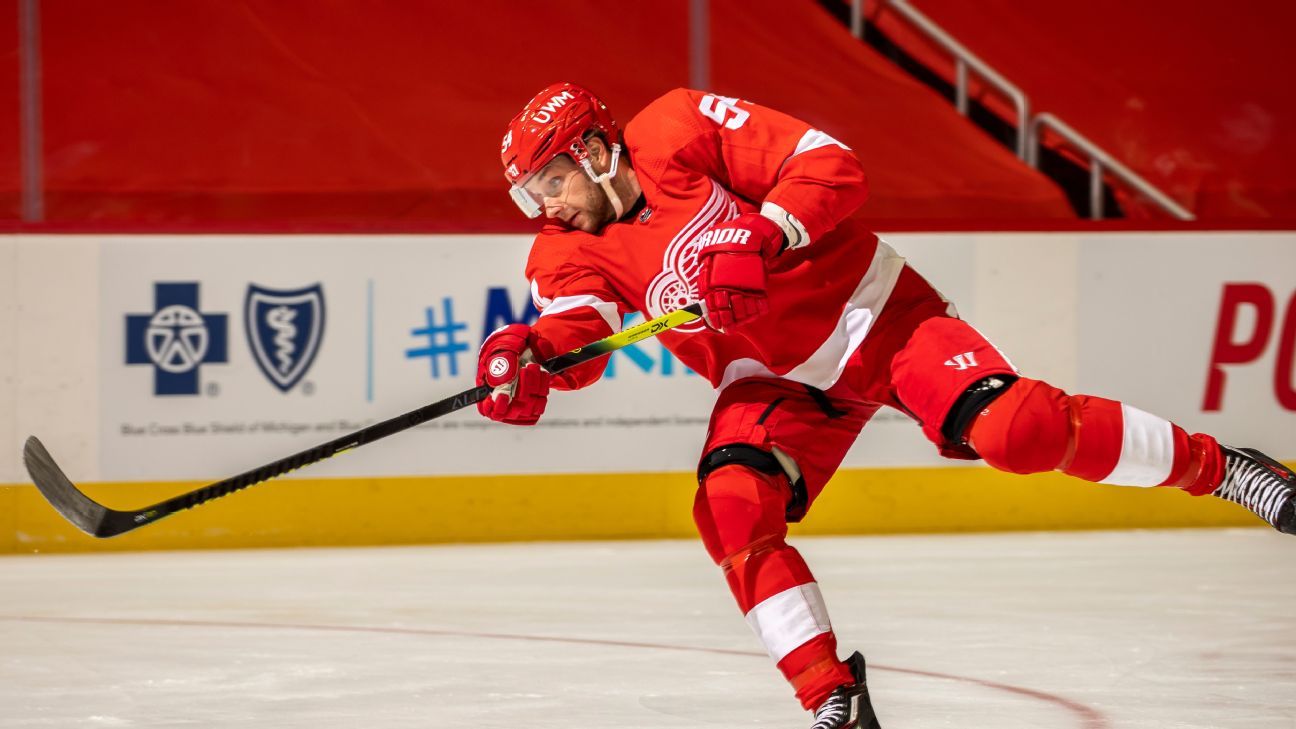 For the most part. While some teams have five games under their socks, and others only a pair, we’ve yet to see anything from the Dallas Stars (although not for long). Hey, we knew it wasn’t going to unfold crisply. So in the spirit of rolling with what 2020-21 is already throwing at fans and fantasy managers alike, here are some notes and observations from around the league after the first eventful fat week of play.

Join or create a league in the No. 1 Fantasy Hockey game, and play your way with custom scoring and lineup features.

Create or join a league today >>

The Carolina Hurricanes are off until at least next Tuesday after five players were placed on the league’s COVID protocol list earlier this week. Their scheduled opponent, the Florida Panthers, are also idle until Tuesday’s slated tilt with the Columbus Blue Jackets. Bench all those affected. Fantasy managers in leagues that adjust lineups weekly might also keep a close eye on the Hurricanes’ status over the weekend. As mentioned, they’re off until Tuesday at the earliest. Carolina is booked to face the Tampa Bay Lightning twice next week.

No one in Columbus has more blocked-shots than forward Boone Jenner with nine. Skating on a dynamic line with center Max Domi , the physical skater also has two goals and an assist on nine shots through three contests. I like Jenner a lot in deeper leagues that reward more than scoring.

Friday. The Dallas Stars are expected to play their first game of the campaign against the Nashville Predators on Friday. The sunny-side up view of the Stars’ postponed debut is they now have games in hand. If the league manages to squeeze in those contests, as it’s determined to do, therein lies an eventual fantasy advantage. For now, managers not completely content with their rosters may consider investing in Roope Hintz, who’s centering a top line with Jamie Benn. Hintz remains available in more than 56% percent of ESPN.com leagues.

The feel-good story of this early season is enjoying a dream debut with his new squad in Detroit. Four goals in three games has Bobby Ryan mimicking his old scoring self from his Halcyon days in Anaheim. He feels great, he looks great, and he should be active in a much greater percentage than a quarter of ESPN.com leagues. At least until the 33-year-old cools off.

Reports out of Boston suggest David Pastrnak could return to action as early as late next week. Once recovered from hip surgery, the dynamite winger is pegged to reclaim his spot on a top scoring line with Brad Marchand and Patrice Bergeron, bumping Jake DeBrusk, and replacing Nick Ritchie on the No. 1 power play. And no, I’m not worried about the Bruins’ failure to score at even-strength thus far. It’s been three games. Give it a minute.

As prognosticated in this preseason’s look at fantasy breakout candidates, Jack Hughes is having a time. In addition to his two goals and four assists, the still only 19-year-old looks exponentially more confident this season, skating on a top line and power play with Kyle Palmieri and Yegor Sharangovich. As it stands, no chance coach Lindy Ruff breaks up that trio, even once Nico Hischier returns healthy. Somehow, Hughes remains available in more than a quarter of ESPN.com leagues. Not for long.

A healthy scratch for the last two contests, Tony DeAngelo is considered a “maybe” for Friday’s game against the Penguins. Hey, banishing a healthy player to the press box for one game is sending a message, two means coach David Quinn liked how his squad looked without the tempestuous defenseman. That could be a concern for DeAngelo’s fantasy managers all season long. Adam Fox is the Rangers’ top blue-line asset at present, with three power-play assists, eight shots, and eight blocked-shots through three games. If Fox is somehow available, snag him.

Catch NHL games streaming live every night (and on replay) this season on ESPN+. Click here for the upcoming schedule and to learn how to subscribe.

Forward Kevin Hayes sports inflated fantasy value while Sean Couturier remains out with a rib injury. Putting in top-line minutes, the veteran center has two goals and three assists to launch this campaign. Prone to running hot/cold, Hayes should be exploited in the here and now in all but the shallowest of leagues. Couturier is anticipated to miss a minimum of two weeks.

With his work visa issues and a subsequent mandatory quarantine period in the rear-view, Kasperi Kapanen is finally one game to the good as the newest member of the Pittsburgh Penguins. After Tuesday’s warm-up in the bottom-six, the speedy winger is expected to make his full-time debut Friday on a top scoring line with Sidney Crosby and Jake Guentzel. If it all works out, Kapanen should be in for a career year, production-wise. The former Maple Leaf is spoken for in a less than a third of ESPN.com leagues. Goalie Tristan Jarry is also one to watch versus the Rangers Friday after his sluggish start as the Pens’ No. 1. A third-straight rocky showing could mean more Casey DeSmith in the near future.

Four members of the Washington Capitals – forwards Alex Ovechkin, Evgeny Kuznetsov, defenseman Dmitry Orlov, and goaltender Ilya Samsonov – are unavailable to play or practice after violating the NHL’s COVID protocols. Bench the rule-breakers until the league clears them to return, keep a view of who joins Nicklas Backstrom and Tom Wilson on the Capitals’ top line, and consider investing in goalie Vitek Vanecek in the meanwhile. He’s going to be busy. Washington faces the Sabres on Friday and Sunday, followed by the Islanders on Tuesday.

Devon Toews leads Colorado’s defensive corps in goals (two) – both scored on the power play – and blocked shots (nine) through three games. With an additional assist to his credit, the former Islanders defenseman should serve as a season-long treasure in leagues that reward scoring, blocked shots, and time-on-ice. Unlike blue-line partner (and fantasy gem) Cale Makar, Toews remains grabbable in nearly half of ESPN.com leagues.

If the four points in three games don’t charm you, perhaps the 14 shots will. Forward Jeff Carter is on an early tear, skating on a line with speedster Andreas Athanasiou and Blake Lizotte. The 36-year-old veteran merits rostering before he cools off. He’s widely available.

As promised pre-season, coach Pete DeBoer is rolling out his goalies in equal measure to start 2020-21, and both Robin Lehner and Marc-Andre Fleury have performed splendidly for the perfect 4-0 Golden Knights. While Lehner is roundly spoken for in ESPN.com leagues, Fleury is not.

Nursing an undisclosed upper-body injury, forward Patrik Laine is listed as “doubtful” for Thursday’s contest in Ottawa. Veteran Mathieu Perreault – irrelevant in fantasy circles – is again anticipated to fill a few minutes on a line with Paul Stastny and Kyle Connor, who’s been brilliant out of the gates. Laine’s managers can only hope he’s feeling fit by Saturday when the Jets host the Senators.

Forward Joe Thornton is expected to miss some time with an undisclosed injury after taking an awkward hit into the boards Wednesday. Monitor who replaces the veteran on the top line and power play alongside Auston Matthews and Mitch Marner. Winger Zach Hyman has largely filled that role in the past.