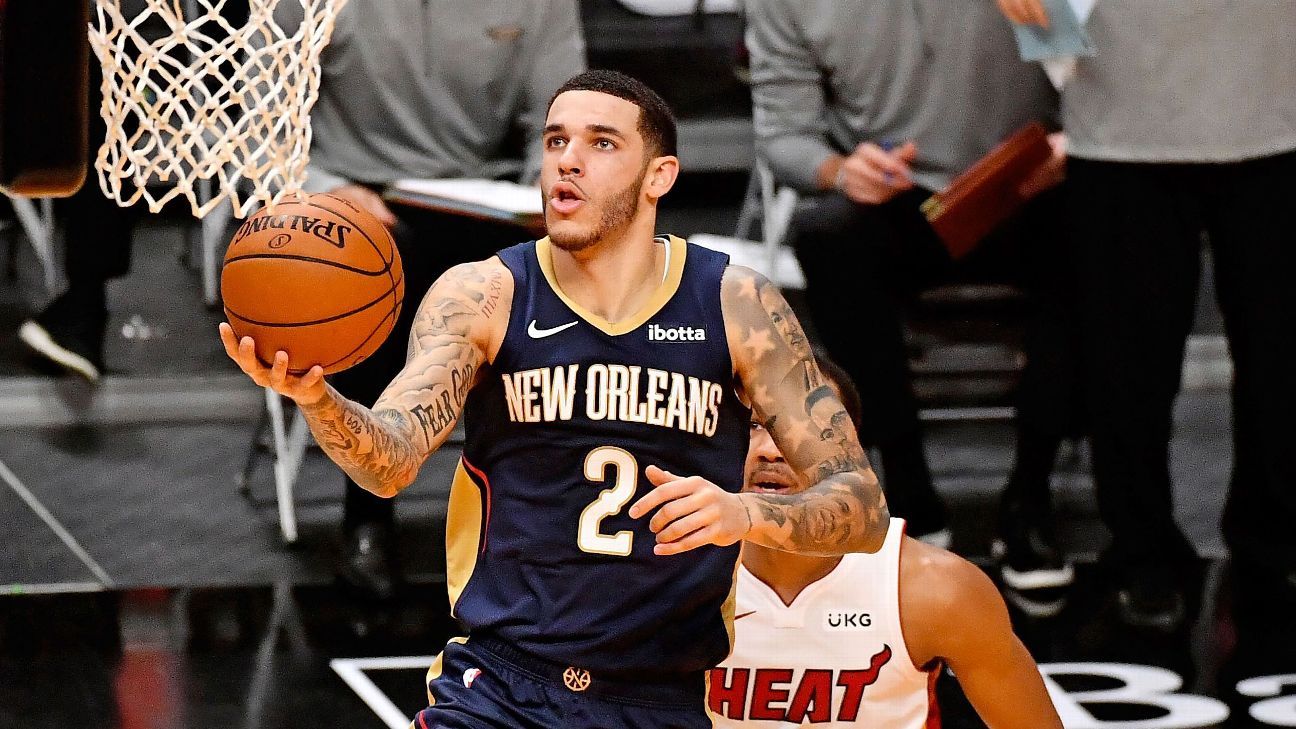 Pelicans guard Lonzo Ball could make his return to the lineup Tuesday night when New Orleans takes on the Utah Jazz in Salt Lake City.

Ball missed the past three games with soreness in both knees.

Pelicans coach Stan Van Gundy said Ball was a full-go for Monday’s practice when the team did about 45 minutes of on-court work, and they’ll see how he’s feeling Tuesday before making a decision on letting him play. New Orleans officially listed Ball as questionable.

“I feel a lot better,” Ball said. “Went through practice for the first time today and it felt good. Plan is definitely to play tomorrow.”

There wasn’t a specific time that Ball suffered any injury, but he said it was something he’d been playing through this season.

“It just got to a point where management came down and said take these next three games and get right and come back stronger,” Ball said. “That’s what I did, and I feel a lot better. I felt like we made the right decision as a whole.”

Ball said the team has him on a new treatment program as well as a new weight program that are helping him get back in order. The new regimen includes more stretching, and Ball said he hopes the change is similar to the one he made in December 2019, when he changed up his weight program to help a nagging ankle injury and an adductor injury he suffered earlier in that season.

“When that got right, my game got better,” Ball said. “Hopefully this year, getting my knees right, we can do the same thing.”

In his absence, Nickeil Alexander-Walker and Kira Lewis Jr. have played major minutes next to Pelicans guard Eric Bledsoe, who missed a game last week because of a right eye irritation.

In three starts, Alexander-Walker averaged 19.7 points, 5.3 rebounds and 2.7 assists while shooting 59.0% from the field and 57.1% from deep. Lewis, the Pelicans’ first-round draft pick, averaged 5.7 points and 2.3 assists while only committing one turnover in the past three games.

Ball said he saw both players “seizing the opportunity” given to them.

“We all knew what Nickeil was capable of. We know he’s a pure scorer, and that’s what he showcased out there,” Ball said. “We all knew what Kira was as well, being a rookie but still coming in and keeping the pace of the offense up and not turning the ball over and doing the things we know he can do.

“I’m just proud of those guys. They put a lot of work in every day. A lot of hard practices, and we can see it paying off.”

New Zealand coach critical of timid approach: ‘Not sure we fired a shot at them’
Djokovic passes Federer for most weeks as No. 1
Transfer Talk: Madrid ready to make €150m move for Haaland
Bruins’ Carlo will be out ‘a while’ after Wilson hit
DeChambeau outduels Westwood for Bay Hill win