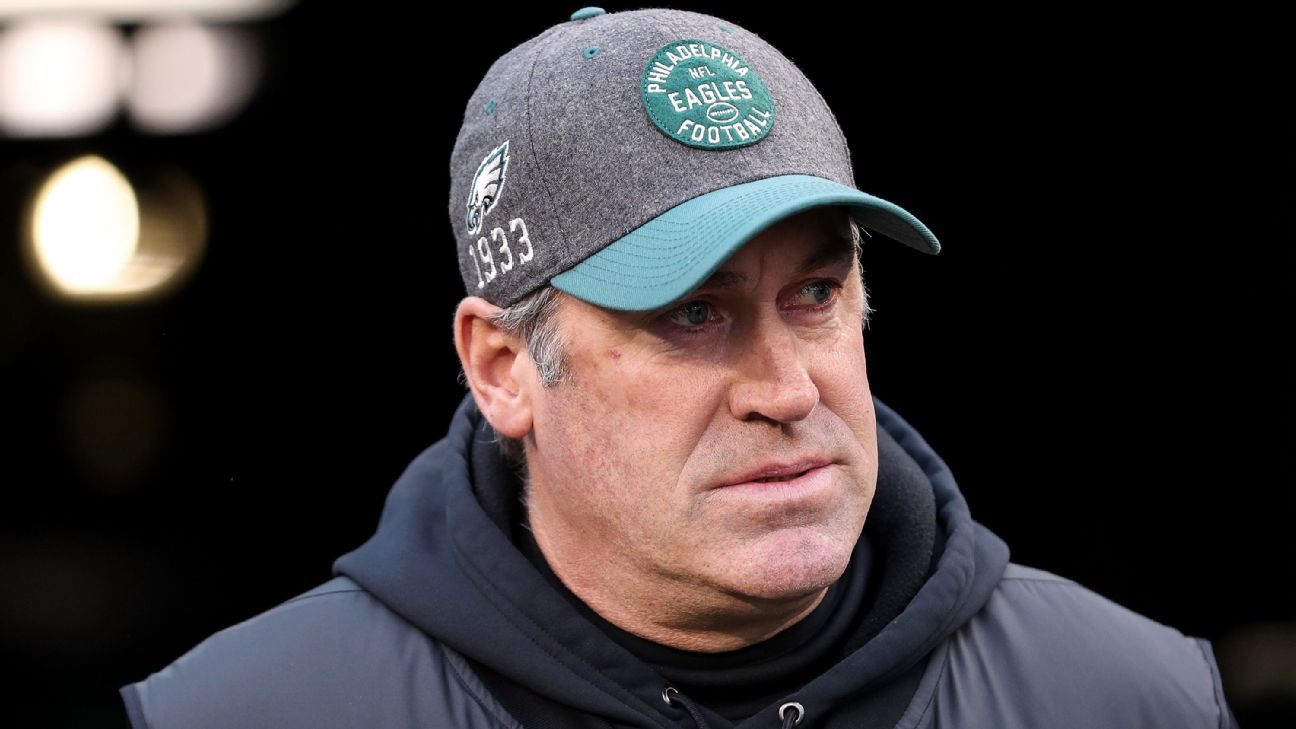 FLORHAM PARK, N.J. — When Joe Douglas was introduced as the New York Jets‘ general manager, he thanked about a dozen people from his past, including Doug Pederson. He mentioned Pederson among a handful of members from the Philadelphia Eagles‘ organization, saying, “We will walk together forever in the history of pro football” — a reference to their Super Bowl title in February 2018.

No doubt, the bond of a championship is strong. We’re about to find out how strong.

Pederson is looking for a job after being fired Monday by the Eagles; Douglas is looking for a coach after a 2-14 disaster that resulted in Adam Gase’s ouster. Under ordinary circumstances, this would be a no-brainer for the Jets. You have a Super Bowl-winning coach on the market (the Jets haven’t had one of those since Bill Parcells) and he happens to be tight with the GM.

Thing is, these circumstances aren’t ordinary. Pederson went down hard in Philly, hard and ugly, capped by his controversial decision to pull rookie quarterback Jalen Hurts in Week 17. It fueled allegations of tanking, and that’s not the kind of stink that washes away easily. It would travel with him up the New Jersey Turnpike if he were to get hired by the Jets, who don’t need another retread that has to explain what went wrong in the previous job (see: Gase).

Will Douglas reach out to Pederson? It wouldn’t be a surprise if he wants to discuss the position. After all, they spent three years together. Douglas, who said last week he’s looking for a “great partner,” has maintained a good relationship with Pederson. But it’s premature to say Pederson’s sudden availability means he jumps to the top of the Jets’ list. At this point, he’s viewed as a fallback candidate. Besides, Pederson is planning to take some time to mull his future and whether he wants to coach in 2021, according to Paolantonio.

Through conversations with former players, coaches and key figures, Peyton Manning gets to the heart of football history and its cultural impact. Watch on ESPN+

Pederson beat New England and coach Bill Belichick in Super Bowl LII with a backup quarterback (Nick Foles), and he made the playoffs in three straight seasons — the kind of stuff that doesn’t happen by accident. But there have been too many red flags over the past year to anoint him as the Jets’ savior. The Eagles went 4-11-1 in a terrible NFC East division, quarterback Carson Wentz regressed significantly and the Wentz-Pederson relationship reportedly went kaput somewhere along the way. Then, of course, there was the Week 17 debacle, which created the perception Pederson quit on his team.

Two years ago, the Jets made the mistake of hiring Gase immediately after he was fired by the Miami Dolphins. It would be the definition of delusion to try it again with Pederson. A fired coach often times needs a year away from the crucible of the job, time to decompress and take stock. Pederson could benefit from a respite, especially after a taxing few months on the job in Philly.

In the mean time, the Jets will continue with their search, probably narrowing their focus this week and setting up second interviews (in-person) with their main targets. So far, the interviews have been virtual. As promised, Douglas has cast a wide net, speaking with so-called hot coordinators (Saleh and Daboll) and fast-rising talents (Glenn and Los Angeles Rams defensive coordinator Brandon Staley).

He couldn’t go wrong with Saleh or Daboll, who can’t be hired until the Bills are eliminated. Saleh is a proven coordinator with an energetic, upbeat personality, a la Pete Carroll, one of his mentors. He’d be the anti-Gase, someone who would galvanize the entire team. Daboll has a winning pedigree (five Super Bowl rings as a New England Patriots assistant) and impressive DNA (Belichick and Alabama’s Nick Saban). He also has received widespread credit for his work with Bills quarterback Josh Allen. This matters to the Jets, who need someone to fix Sam Darnold or groom a rookie.

Douglas has a big decision to make. If he’s smart, he will put friendship aside and take a pass on Pederson.

Zion sits out vs. Clippers after inconclusive test
Maryland to settle with McNair family for $3.5M
The All-Saban team: Nick Saban’s all-time best player at every position
MMA Rank 30-21 – Which fighters will have the best 2021?
Povetkin-Whyte II confirmed as Brit eyes revenge