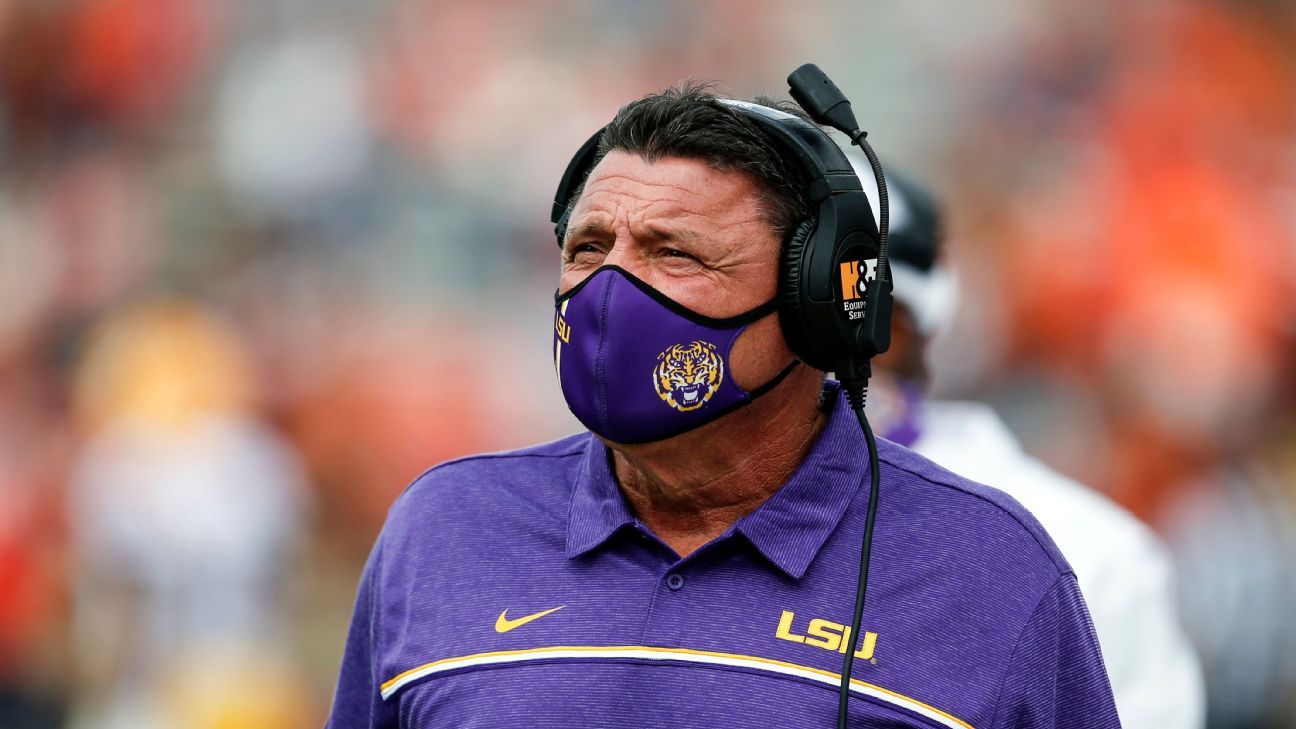 As LSU gets set to host No. 1 Alabama this week, coach Ed Orgeron remains upbeat on the future of his program that slipped to 3-4 after a frustrating 20-7 loss to Texas A&M last week.

Just a year ago, the Tigers were on the brink of an SEC title en route to one of the most dominant seasons in college football history, and Orgeron said Monday that he believes his program can get back to that level.

“We’re building a championship program,” Orgeron said, “and we will be champions again. We’ve got some great young players. We have some stuff that needs to get fixed, and we have to fix it. But I’ve done it before and I’ll do it again.”

LSU was gutted in the aftermath of last year’s national championship, with a record-setting 13 players selected in the 2020 NFL draft, defensive coordinator Dave Aranda and passing game coordinator Joe Brady leaving for other jobs, and several high-profile stars opting out for the 2020 season, including receiver Terrace Marshall Jr., who just announced his decision to leave the team this week.

Just two weeks ago, Marshall addressed his teammates and implored them to show more focus and buy-in. But after LSU’s latest loss, Orgeron said the receiver “had a change of heart.”

Marshall is the latest loss from last year’s title team. The loss of so many players from last season is the primary reason for LSU’s struggles, Orgeron said. He pointed to the litany of former Tigers now starring in the NFL this season, but the additional opt-outs from Marshall and Ja’Marr Chase have added to the problems.

“This year has been a challenge with COVID-19 and other stuff,” Orgeron said. “You don’t know when the next guy will opt out or who’ll opt out. But I think we build a good culture here and have a good foundation.”

Saturday’s matchup against top-ranked Alabama comes with a distinctly low-key feel, the first time these two teams have played with the matchup so apparently one-sided in years. The game is a make-up for a Nov. 14 game that had been postponed due to COVID-19 issues at LSU, and Orgeron quipped that his team is better prepared for the showdown now.

“We have enough players to play,” he said.

“We play Alabama at home,” Orgeron said. “That’s all I needed to say.”

Orgeron praised his defense’s performance last week, holding Texas A&M to just 267 yards, a season low. The performance comes after weeks of criticism aimed at first-year defensive coordinator Bo Pelini. Meanwhile, the offense struggled badly against the Aggies, and Orgeron said LSU would practice with both TJ Finley and Max Johnson at QB this week.

Orgeron said he’s told his team to focus internally rather than on the challenge of playing top-ranked Alabama, and he said the experience, in the end, will be beneficial for the myriad young players who’ll be the foundation of any potential turnaround in 2021.

“You need to build grit within a football team. You need to build toughness, and the young guys have to go out there and learn how to win. But we need to coach them better,” Orgeron said. “Nobody wants to go through a season like this, but I do believe we’re building character and grit that’s going to pay off for us later on.”