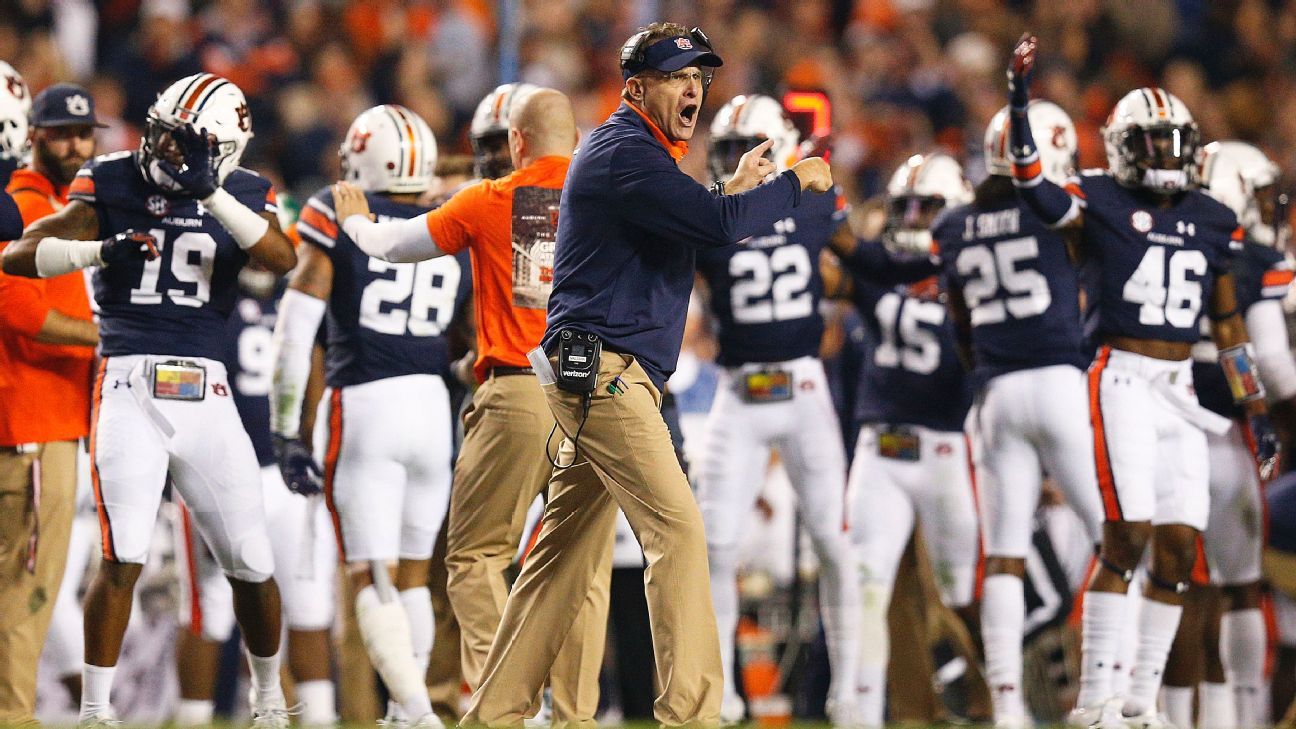 There are three games scheduled between ranked teams this week in college football. Two such contests are on Friday, and then there is the Iron Bowl on Saturday. Favorites are 15-7-1 against the spread (ATS) in ranked matchups this season, so that is worth keeping in mind

Here are some more tidbits to help you through the weekend of games.

Odds listed are from Caesars Sportsbook by William Hill and subject to change.

• Iowa State is 0-4 ATS against Texas under Matt Campbell.

• In five seasons under Campbell, Iowa State is 21-9 ATS as an underdog (eight outright wins), the eighth-best record among FBS teams over that span (third-best among teams with at least 20 games as an underdog in that span behind Eastern Michigan, at 25-9, and Fresno State, at 18-7-1).

• Iowa State is 11-4 ATS against AP-ranked teams over the past four seasons, with a 7-8 outright record.

• Texas has gone under the total in 16 of 21 games in November or later over the past five seasons (one push); the 80% under percentage is the highest among FBS teams in that span.

• Nebraska is 1-6 ATS on the road over the past two seasons (tied for the fourth-worst cover percentage in that time).

• Notre Dame is 9-5-1 ATS in games as a road favorite over the past four seasons.

• Notre Dame is 1-4 outright and ATS as a road favorite of 6 or fewer points over the past eight seasons (only win was September 2017, -3.5 at Michigan State).

• North Carolina is 3-0 ATS vs. ranked teams in the current Mack Brown era.

• North Carolina’s past four games have gone over the total (combined 86.5 PPG in those games); it hasn’t had five straight games go over since the 2003 season.

• Oregon is 21-9-1 ATS as a road favorite over the past 10 seasons, tied for the fourth-most wins over that span among all teams.

• Oregon is 6-3-1 ATS in its past 10 meetings as a double-digit favorite against Oregon State.

• Oregon is 5-1 ATS in its past six meetings vs. Oregon State after going 1-8 ATS against the Beavers in the previous nine meetings.

• Oregon State is 10-3 ATS as an underdog (5-8 outright) over the past two seasons, fifth best among Power 5 teams.

• Oregon State is 9-3 ATS (5-7 outright) in conference play over the past two seasons, second best in the Pac-12 (behind Utah, 8-2) and fourth-best among all teams.

• Over the past two seasons, Ohio State is 5-1 ATS as a road favorite, and Illinois is 4-1 ATS as a home underdog.

• Ohio State is 3-5 in its past eight games vs. conference foes (including last season’s Big Ten championship game) after covering its previous seven games vs. Big Ten teams.

• This would be the fifth Ohio State game with a total over 70 since 2000 (the previous four all went over); this would be the third such Illinois game in that time, and both of those games went over.

• Florida has covered in eight of its past nine games as a home favorite, including a 7-1 ATS mark over the past two seasons (did not cover in its previous such game, vs. Vanderbilt last week).

• Kentucky has covered in its past three meetings with Florida after going 1-9 ATS in the previous 10 meetings.

• Eighteen of Kentucky’s 24 conference games over the past three seasons have gone under the total.

• The past five meetings between these teams have gone over by an average of 15.3 PPG.

• Maryland is seeking to be the second team since the 1978 FBS/FCS split to win three straight games as a double-digit underdog (2006 Arizona).

• Maryland is 2-15 ATS in its last 17 games against ranked conference opponents dating back to 2015.

• This would be the third game for Texas Tech this season with a total of 55 points or lower; they had three such games from 2012-19.

• This is the first time Jim Harbaugh has faced an unranked opponent at home at Michigan and not been a double-digit favorite.

• Michigan is on its second ATS losing streak of at least four games over the last three seasons (seven straight over 2018-19 seasons).

• Michigan has covered in five of its last six games all-time vs. James Franklin (all with Franklin as Penn State’s head coach); 4-0 ATS in those games as a favorite.

• Four of the five meetings between Harbaugh and Franklin have gone over the total.

• Coastal Carolina is 4-0 in games as road favorite since becoming an FBS team; Three of those wins were by more than 30 points.

• Coastal Carolina is 0-2 ATS and 1-1 outright in games against Texas State since moving to the Sun Belt Conference.

• Alabama is 4-1-1 ATS at home against Auburn under Saban.

• This is the sixth time in the last 15 seasons that Auburn has been an underdog of 20 or more. The Tigers are 1-4 ATS in the previous five, losing all five outright by an average of 29.0 points. Three of those games were against Alabama (lost those games by an average of 36 points).

• Clemson is 2-7 ATS in its last nine games dating back to last season’s CFP National Championship game. Prior to this run, Clemson had covered in 10 of its previous 12 games.

• Pittsburgh’s last six games have all gone over the total (only five of the team’s previous 20 games went over). That’s the longest streak by Pittsburgh since it had 11 straight games go over in the 2016 season

• Four straight Clemson games have also gone over; the over was 2-6-1 in Clemson’s previous nine games.

• Over the last 20 seasons, this would be the seventh time that Northwestern has been a double-digit road favorite. It is 5-1 ATS and 6-0 straight up in the previous six games. The only ATS loss came as a 20.5-point favorite at Rutgers (Illinois won by three).

• Northwestern is 7-0-1 ATS in its last eight games dating back to last season. The Wildcats are one of two teams this season with at least five games played without an ATS loss, the other being Indiana.

• This will be the second time that Michigan State has been an underdog vs. Northwestern since the 1978 FBS/FCS split. The other came in Sept. 2001, when 16th-ranked Northwestern beat 23rd-ranked Michigan State by one, but didn’t cover as a 7-point favorite. Since then, the Spartans have been a favorite in all 14 matchups, but they are 5-9 ATS in those games.

• Michigan State has covered in three straight and eight of its last 11 games as a double-digit home underdog. It won its last such game outright, in Nov. 2017 against Penn State (won by three as 10-point underdog).

• USC’s three games this season have all gone under the total (by an average of 5.0 PPG) after its final six games of the 2019 season went over.

• USC is one of four FBS teams to not have a game over this season along with Northwestern (five games), Arizona State and Utah (one game each).

• This will be Colorado’s 10th consecutive game as an underdog; that’s the team’s longest streak since an 11-game stretch over the 2012-13 seasons.

• LSU has covered in nine straight games vs. Texas A&M dating back to the 2010 season and in all eight meetings between the schools as SEC opponents. That’s the second-best ATS record for one team versus another since 2010, trailing only Arkansas State’s 10-0 ATS mark vs. UL Monroe.

• Since the start of the 2017 season, South Carolina is 4-1 ATS as an underdog of 20 points or more with one outright win, that coming last season against Georgia (+20.5).

• South Carolina has failed to cover in its last four games. It last went five games without covering in the 2007 season (0-4-1 ATS). It last lost five straight games ATS over the 2004-05 seasons (final six games under Lou Holtz and first under Steve Spurrier).