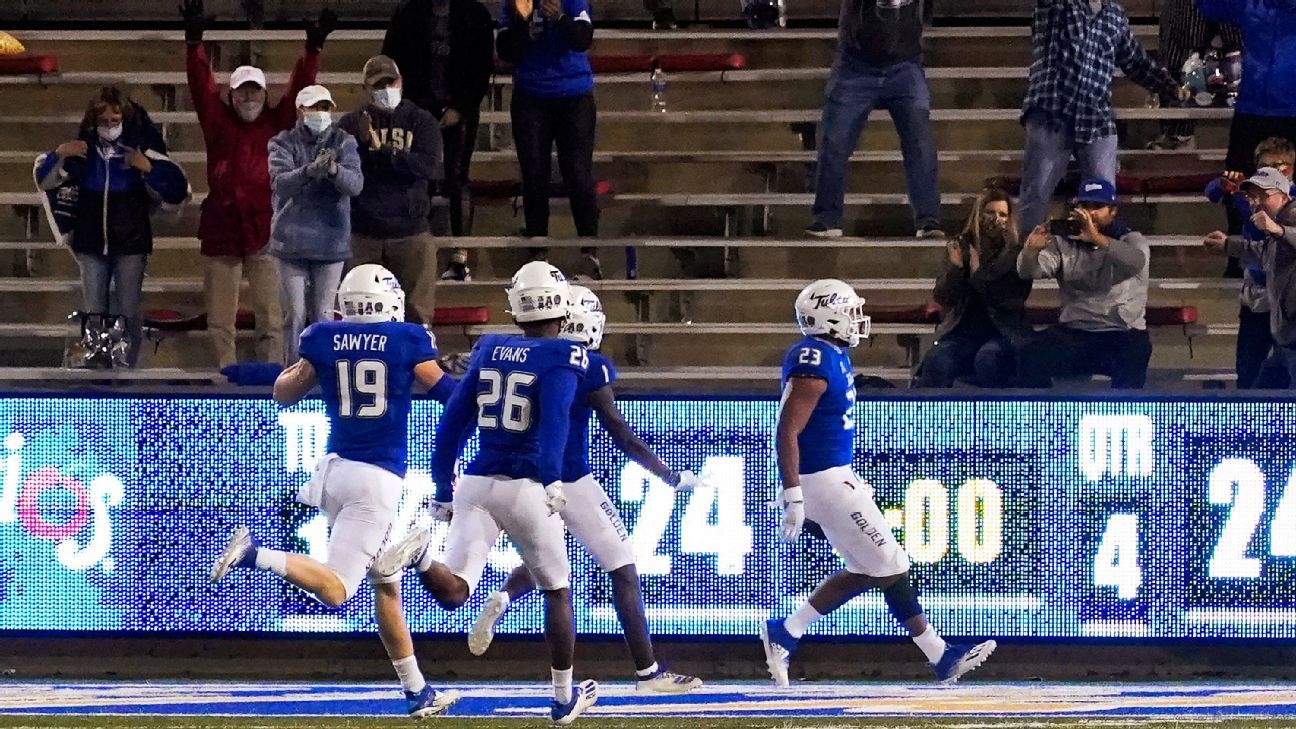 It’s Week 12 of the ever-evolving college football season. A quick glance across the schedule this week reveals these quirks:

Ohio State may be facing its biggest conference hurdle in … Indiana. Northwestern is 4-0 after winning three games last season. A top-25 Liberty team is playing its third game against the ACC. Tulane played its 10th game on Thursday night, while Utah is playing its first game on Saturday.

In other words, Week 12 is as weird as the rest of this season.

We’ll be watching the Top 25 teams and keeping up with the best highlights, moments and plays of the day all day.

Tulsa fell behind a quickly improving Tulane team in the second half, 14-0, and lost both of its top two QBs to injury. So the Golden Hurricane got blown out then? Nope! Third-stringer Davis Brin threw for 266 yards in barely more than 18 minutes, completed a 37-yard mini-Hail Mary to JuanCarlos Santana to force overtime and watched from the sideline as Hurricane star Zaven Collins took a pick six 96 yards to win the game in double OT. Always. Watch. Tulsa games. Stuff like this happens every week. — Bill Connelly

What else is there to say about this catch from Ty Fryfogle.

Well, this is different

Not really sure what to make of this, but whatever it takes.

Maybe this was a little too easy to believe

To run or not run? Blake Hayes had a wide open field and yet he still hesitated three times to get the first down.

Suffice to say, Nebraska fans were long done with the game before that fake punt.

Who is he trying to fool?

Don’t think anyone is buying this Amad Murray flop.

Did TJ McDaniel get the memo?

SMU’s game against Houston got postponed, but apparently no one relayed the message to McDaniel.

LeBron is locked in

LeBron James, Ohio native and noted Ohio State fan, has all his attention on the game against Indiana.

But it was Shaun Wade’s pick-six that really got hold of LeBron’s attention.

The Oregon Duck has been trying its hardest to get into any of Oregon’s games this season, and this week it took things to a whole new level.

snuck past the security guard on his lunch break yesterday… it’s been 16 hours and still nobody has seen me yet… i think imma make it to saturday… OVER pic.twitter.com/IWzVfIf45P

still haven’t been spotted… starting to get hungry… i finished my bag of chips 5 minutes after i got here. only 21 more hours until the game.. this just might work… OVER pic.twitter.com/FH6ff4Qmiw

Alas, the Duck was caught and sent home.

Justin Fields entered the game with zero interceptions on the season, but in just the first quarter, the Heisman candidate threw two picks.

But that’s more a testament to Indiana’s stout defense.

Where did he get those pants?

Gov. Eric Holcomb is all decked out in his Indiana gear and even has an IU guitar handy as he watches the game.

Trevon Grimes wasn’t going to let anything get in his way for this TD.

Kyle Trask threw it up ⬆️

Will Sheppard got way up to complete this wild catch.

Vanderbilt QB Ken Seals throws a pass and WR Will Sheppard has to leap over a defender’s back to make the grab.

The latest on the Clemson-Florida State postponement

Florida State and Clemson will not play Saturday after the teams’ medical personnel could not mutually agree on moving forward with the game, the ACC said in a statement.

The teams were supposed to play at noon in Tallahassee, Florida.

A source told ESPN that a Clemson player tested positive for COVID-19 on Friday after practicing with the Tigers during the week. That led Florida State to say it was not comfortable playing Saturday’s game, the source said.

Players from both sides weighed in after the announcement.

We were too ‼️ We good over here 👀 https://t.co/RzplTwn8FD

A wild finish in Tulsa

What happened in Tulsa-Tulane? Just about what you’d expect when the color-coded weather phenomena take the field. The Golden Hurricane spotted the Green Wave a 14-0 lead heading into the fourth, before storming back — get it, storming back? — to tie things up as time expired in regulation on a long touchdown pass.

Tulsa then outdid itself in the second overtime, when potential All-American linebacker Zaven Collins walked things off with a pick-six.

The Golden Hurricane are now 4-0 when trailing by 14 points or more this season. They’re the first time to do so since 2005. pic.twitter.com/axeu2srX5u

And then it was time to celebrate.

Making the most of the mask

The yellow mask works surprisingly well as a beak … when the rest of you is red. This Louisville fan gets it.

A responsible way to have school spirit pic.twitter.com/CorxcGxA4e

Who wore it best

The journey continues. The path has been cleared for us.

Penn State is wearing elements from uniforms from the 1950s, ’60s and ’70s in one throwback set.

Appalachian State is wearing a white uni/white helmet combo with an American flag-themed Yosef on it.