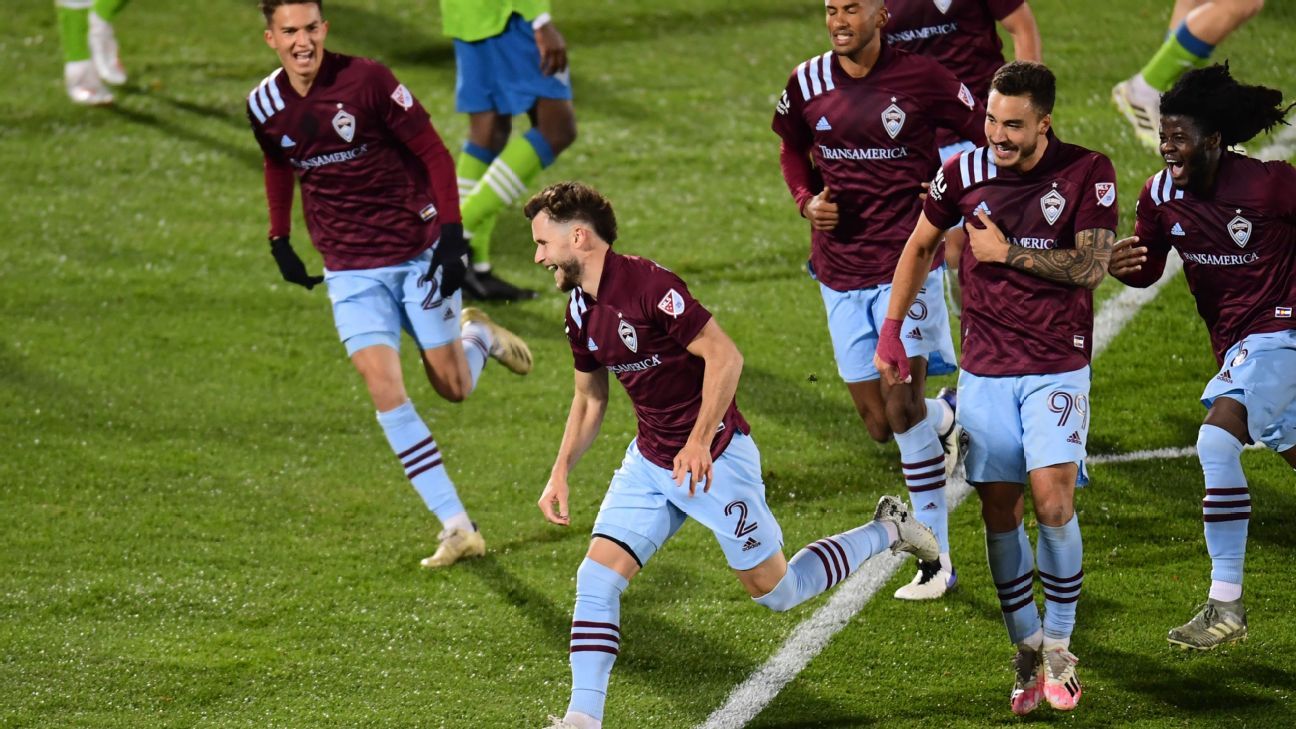 On Sept. 23, the Colorado Rapids reached a point in their 2020 MLS odyssey at which the team couldn’t wait to get back on the field. Their 5-0 drubbing of San Jose brought the Rapids within two points of Western Conference leader Seattle, and there was an internal confidence that they would continue to rise.

Between the league’s initial pandemic-induced four-month postponement starting in March, an additional month off between the Rapids’ exit from the MLS is Back Tournament and the season’s restart in August, continuity had been hard to come by. However, under first-year coach Robin Fraser, the Rapids dealt with the adverse circumstances about as well as possible and had won three of four heading into a key match against Sporting Kansas City on Sept. 27.

The good vibes were short lived. A day before the SKC match, 2020 struck again. Three staff members and a player tested positive for COVID-19, training was suspended and the match postponed.

Several months into the global coronavirus pandemic, these types of stoppages were no longer surprising, but no less frustrating. Rapids homegrown midfielder Cole Bassett, one of the league’s most promising young players, summed it up succinctly.

“It sucked,” he said. “You just want to keep playing games.”

When the regular season ended, Colorado managed to play just 18 of 23 scheduled games, three fewer than any other team in the league. The Rapids’ 28 points still would have been enough to squeak into the eight-team Western Conference playoff field, but they head into Sunday’s first-round match at No. 4 Minnesota United FC (1:30 p.m. ET, stream live on ESPN) with the No. 5 seed after MLS chose to sort the standings by points per game to account for scheduling inequities.

As the Rapids played an elongated game of red light, green light while the rest of the league moved forward, club executives stayed in regular contact with the league office. Although it became apparent early on that the switch to points per game was likely, the league didn’t make it official until Oct. 31, when Colorado had just three games left on the schedule.

“We’re in the year of uncertainty with COVID-19,” midfielder Kellyn Acosta said. “[The coronavirus] brings many challenges. It’s definitely been tough doing our meetings virtually, having individual training. Training two days here, having a COVID-19 outbreak and not being able to train for a week or two weeks. Not being able to play five games. It’s been crazy.”

After losing 4-0 in its first game back against SKC, Colorado has progressively regained its promising form and won three straight to finish the season.

“We feel like we’re in a hot streak going into the playoffs,” Bassett said. “So we’re feeling pretty good and confident in ourselves.”

For the Rapids, one of the league’s original clubs, simply reaching the playoffs has hardly felt like a foregone conclusion. They’ve failed to qualify in five of the past six seasons and have advanced in the MLS Cup playoffs just twice since winning MLS Cup in 2010.

When they’ve found success in the past, it usually came in spurts, and for Padraig Smith, who arrived as sporting director in 2015 and was elevated to executive vice president and general manager in 2018, changing that has become a priority. In 2016, the team finished second in the league in points and reached the conference finals, but an aging roster that included United States internationals Tim Howard and Jermaine Jones wasn’t built to last.

“The real issue was that we didn’t feel that sort of success was sustainable,” Smith said. “Ultimately, we wanted to be a club that wasn’t in the playoffs every couple of years and wasn’t challenging for titles once a decade, but was a perennial playoff team and a team that was competing for titles year in and year out.”

After his title bump, Smith, along with senior vice president of business operations Wayne Brant, shifted gears. They refocused efforts on the club’s academy, sought out young players from around the league and incorporated more analytics into their recruitment and on-field approaches, while thinking more long term.

Smith’s interest in sports analytics traces back to 1999, when he headed to the U.S. from Ireland during a college summer to play for the Harwich Hurricanes of the Cape Cod Amateur Soccer League. He became a fan of the Boston Red Sox, was introduced to baseball sabermetrics and was inspired to try to develop similar ways to identify efficiency in soccer. That helped set him down the path to financial roles with the Football Association of Ireland and UEFA, before returning to the United States to join Colorado’s front office.

The first major move in the rebuild was a midseason trade in 2018 for Acosta, who at 22 years old had already been capped 17 times by the United States, but was in need of a change of scenery after coming through the FC Dallas academy and spending parts of six seasons with the first team.

“The Acosta trade, for me, was a statement trade for this club,” Smith said. “There had been a history in terms of how our rosters had been built in the past and we made a very clear statement that we were changing course and changing direction.”

In 2019, another midseason trade brought in winger Jonathan Lewis from New York City FC, giving the club another young American with national team experience. Trades for center-backs Lalas Abubakar (Columbus) and Auston Trusty (Philadelphia) were made in a similar mold.

Even as the Rapids have focused on building a young core, Smith acknowledged there will always be a need for experienced domestic players and acquisitions of higher-end talent through the global market to supplement the roster. In that vein, midfielder Jack Price, who played a small role for Wolverhampton Wanderers on their way to promotion to the Premier League in 2017-18, has been a key figure in midfield since arriving in 2018, while midfielder Younes Namli, the team’s lone Designated Player, and forward Diego Rubio have been two of the team’s most important players in attack.

Colorado’s change in philosophy hasn’t been without setbacks. In 2019, the team’s 11-game start (0-9-2) was the worst in MLS history and contributed to the ouster of second-year manager Anthony Hudson. Before he was fired, Hudson publicly assigned blame to the team’s lack of talent, including after his final match in charge, a 1-0 loss to Atlanta, when he said, “We are fighting down at the bottom with a bottom group of players and we have to find a way to pick up a result.”

But after Hudson, who is now coaching the United States U20 men’s national team, was replaced by Conor Casey on an interim basis, Colorado turned things around, picking up 1.6 points per game the rest of the season — a rate that would have been good enough for third place in the Western Conference over the course of the entire season.

As Colorado revived its season, the organization took its time to settle on a permanent replacement. About two months after first making contact with Fraser, then an assistant with Toronto FC, he was announced as the club’s ninth permanent manager in late August, after the club paid Toronto $75,000 in General Allocation Money for his rights. For Fraser, the concept of being at a place that wanted to bring more players through its academy and having the chance to develop those types of players carried a lot of appeal.

Ale Moreno picks Minnesota United as a side to watch out for ahead of the MLS playoffs.

After Philadelphia’s run to the Supporters’ Shield this year, relying heavily on players who have come through their academy like Mark McKenzie and Brenden Aaronson, the league’s shift toward investing in player development only figures to speed up.

Colorado hasn’t exactly been on the forefront of the league in terms of getting production from its academy, but of their 12 all-time homegrown players, eight have come since 2017 and the team ranked No. 5 in the league in the percentage of total minutes played this season by players under 22 years old (16.17%), trailing only LAFC, Philadelphia, Montreal and Vancouver.

In Bassett and left-back Sam Vines, the Rapids have two of the league’s best examples of how an academy can pay off. Both players were named to the MLS 22 under 22 list for a second straight year and figure to factor into U.S. Soccer’s busy 2021 calendar, which includes the U20 World Cup, Olympic qualifying and potentially the Olympics for the U23s, the Gold Cup and the conclusion of the CONCACAF Nations League. Vines, the lone Rapids player to play every minute this season, received his first senior national team cap in January, while Bassett appears on course for an eventual transfer to Europe.

“If you can produce top talent that will contribute and help you succeed in MLS and then potentially sell that talent on Europe and reinvest that money back into the academy, recruitment and player development,” Smith said, “then you can really create a business model that would have long-term sustainability.”

In 2020, Bassett ranked No. 4 in the league in goals-plus-assists per 90 minutes and No. 5 in distanced covered per 90 minutes (11.33 km). He understands that his ability to live out that proof of concept has the potential to have a long-lasting impact on youth soccer in the region.

“You don’t really connect as much as a kid when you don’t see [first-team] players that were in a similar position to you when you when they were younger,” Bassett said. “You don’t really see it as a realistic goal sometimes that you can get there.

“It kind of started with me and Sammy. We kind of broke through and we’re trying to pave that pathway so that all these Colorado kids see that they really can make it.”