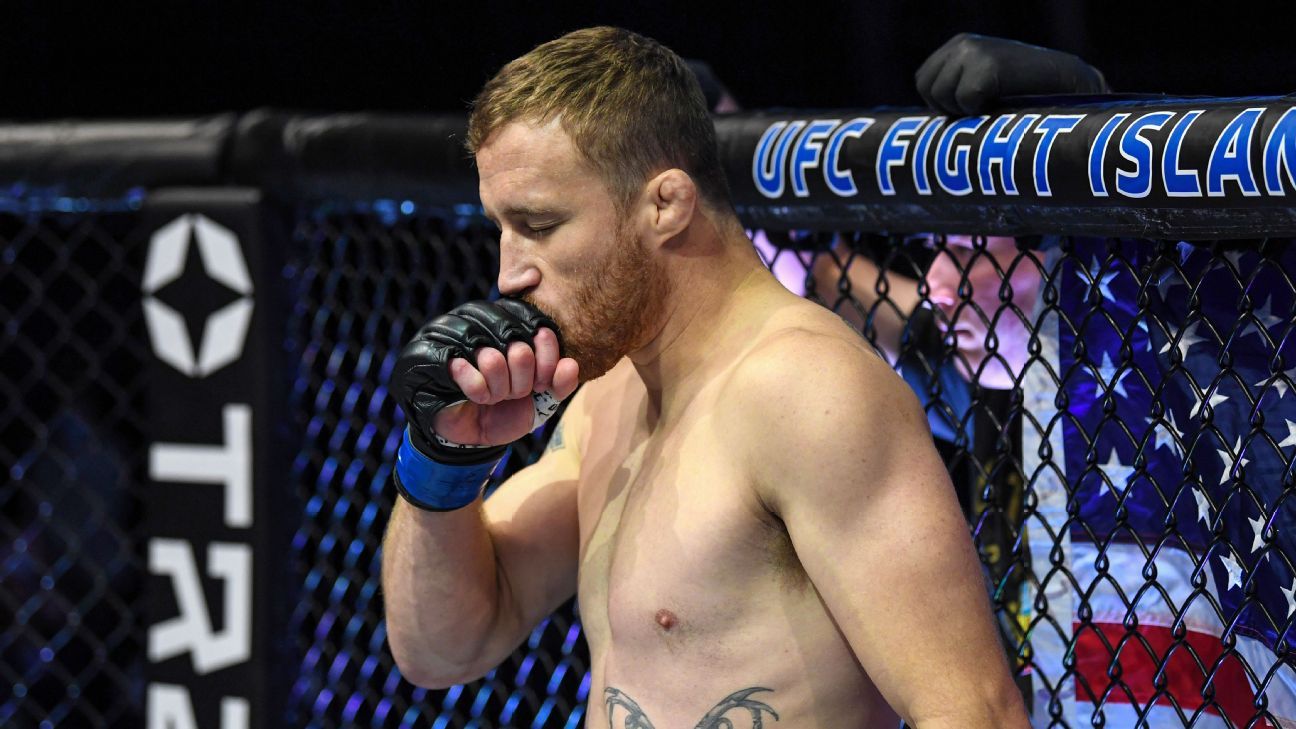 Saturday’s UFC main event was predictable in a way, in that the undefeated champion Khabib Nurmagomedov won. What happened next was not.

Nurmagomedov (29-0) announced his official retirement from mixed martial arts, following the death of his father, Abdulmanap, in July. He revealed his mother did not even want him to compete at UFC 254, but he promised her it would be the final bout of his career.

The Dagestani legend retires as arguably the greatest fighter of all time. And he departs a lightweight division that is now full of uncertainty. UFC president Dana White admitted he does not know what he’ll do in the aftermath of Nurmagomedov’s retirement. There is a massive fight between Conor McGregor and Dustin Poirier tentatively scheduled for January, but it’s not official. Will there be a title on the line in that bout or will Justin Gaethje get his chance against the winner?

Robert Whittaker also made his case to be next up for Israel Adesanya with a strong performance over Jared Cannonier, but will he get the rematch he believes he should? Will he get jumped by another surging middleweight or will he take another fight in the interim?

Brett Okamoto plays matchmaker after UFC 254 and lays out the course for the lightweight title and other standouts from Fight Island.

Who’s next: Winner of Conor McGregor vs. Dustin Poirier on Jan. 23

Assuming the McGregor-Poirier rematch goes ahead on Jan. 23, Gaethje fighting the winner makes a ton of sense to me. He has history with both. After Gaethje beat Tony Ferguson back in May to capture the interim title, McGregor came out publicly saying he wanted to fight him. Gaethje wasn’t interested, as he was to fight Nurmagomedov and Nurmagomedov only. Well, it would seem a perfect time to book that fight now. If Poirier wins, a second fight between Gaethje and Poirier would be fantastic as their first meeting in 2018, which Poirier won via TKO, was spectacular.

Look, I have no idea if Diaz is interested in this fight. He hasn’t shown much interest in Gaethje previously … although he did tweet a little trash talk in his direction the second Saturday’s fight ended. Would this not be an incredible matchup? And now that it appears, for now, that Diaz will not get that Jorge Masvidal rematch he truly wanted, what’s a big fight out there for him? He has been hinting at a fight against Dan Hooker, but with all respect to Hooker, isn’t Diaz vs. Gaethje a much bigger fight? I’ll answer that. Yes. It’s massive. Look into this one, UFC.

Prior to his recent title defense against Paulo Costa, Adesanya was singing Cannonier’s praises and even predicted he would “destroy” Whittaker in this fight. Well, Whittaker proved that prediction wrong, and now he should get a chance to make Adesanya eat his words even further.

Yes, these two just fought in 2019, and Adesanya won. Handedly. He knocked Whittaker out inside two rounds, and it’s quite possible the rematch would go the same way. But consider the following:

A) That loss almost doesn’t matter. Whittaker is clearly the No. 1 contender. So, even if he falls to Adesanya again, he has earned the right at a second shot. That’s how sports work.

B) Whittaker said he was burned out from MMA ahead of the first fight against Adesanya. Again, that might mean nothing in terms of the rematch, but I believe Whittaker is telling the truth about it.

C) Whittaker is an intelligent fighter and lest we forget, he has won 11 of his past 12 fights. He’s still one of the best fighters in the world!

This is a rematch I actually very much want to see.

I don’t see this happening, and I don’t particularly think it should happen, but if Adesanya defends his title against someone else before Whittaker — well, what does that mean for Whittaker? Is he going to wait? That’s potentially a very long time to wait.

So in that scenario, would he take a fight against Costa to even further prove he’s the rightful No. 1 contender? Say it were to play out that way, I mean, no one could deny Whittaker a title shot if he were to go out and beat Costa, on the heels of beating Darren Till and Jared Cannonier.

I really love the idea of this fight. I must admit, I haven’t really thought about this matchup before now, because there was never an obvious time for it. But this is the fight right here. Stylistically, this is a barn-burner. Two very quick, explosive guys on the feet with well-rounded games. Gastelum was very nearly an interim champion 18 months ago. I know he’s on a three-fight skid, but he’s capable of competing with the best on any given night. And Cannonier is still a contender. One loss to a former champ in Whittaker doesn’t change that. Yes, put me down for this one.

If Hall beats Anderson Silva at UFC Fight Night on Oct. 31 in Las Vegas, his stock will be on the rise. And as I always point out, the UFC doesn’t typically like pairing a fighter coming off a loss with one coming off a win — and I get that — but I also think it’s not a necessary rule to follow all the time, and this matchup would certainly make sense despite that. It’s also a very fun stylistic matchup, although most of the fights at middleweight right now are.

There are a lot of entertaining middleweights at the moment, and these are definitely two of them. If Hall wins on Halloween, there’s a strong case for him getting Cannonier next.

Ankalaev is good. Really good. That first fight against Ion Cutelaba, the one that didn’t last a minute and ended in controversy, you couldn’t take much from it because it was basically 38 seconds of chaos. But in this second fight, we really got a great look at how fantastic of a counterstriker Ankalaev truly is. He believes in his speed and his ability to see punches, which results in very, very confident counters. He’s probably one of the fastest guys in this division. Similarly, Walker is considered one of the better athletes at 205 pounds. I’d be very intrigued by this matchup, and even though Walker is only 1-2 in his past three, it makes sense from a rankings perspective.

Prochazka is just 1-0 in the UFC, but I’m hearing whispers about them having a hard time finding him an opponent. He’s unorthodox on the feet, and it would be fascinating to see Ankalaev try to counter that unpredictability. I wouldn’t be surprised to see Prochazka booked against more of a household name than Ankalaev, something that might help turn him into an attractive title challenger, but if that’s an option, I could see the UFC going this route. It’d be a great clash of styles.

Great result for Murphy as she notched the first submission win of her career. She handled the late change in opponent beautifully and gave a great postfight interview in which she stated her next fight would be for the title. I respect the call for a title shot, but I don’t think it’s realistic.

Valentina Shevchenko has Jennifer Maia lined up in November, and I think Jessica Andrade will be (and should be) after that. So, in the meantime? Go back to the original fight, the one that always made sense. Murphy was supposed to fight Calvillo at UFC 254, but Calvillo was pulled due to a positive COVID-19 test. Murphy is in shape, and prepared for Calvillo. It appeared she took no damage in this fight.

Book that matchup again, before the end of the year. And if she wins that, I think. she’ll get her title shot.

Conceivably, Andrade could be next for Murphy. If Andrade’s next fight isn’t for a title, there are only a couple of options that would even make sense for her and Murphy is one of them. I think this would only happen if Andrade is bullish on fighting soon. She’s already, very clearly, the most attractive option for a title shot after Maia in November. There’s no need to book her another non-title fight.