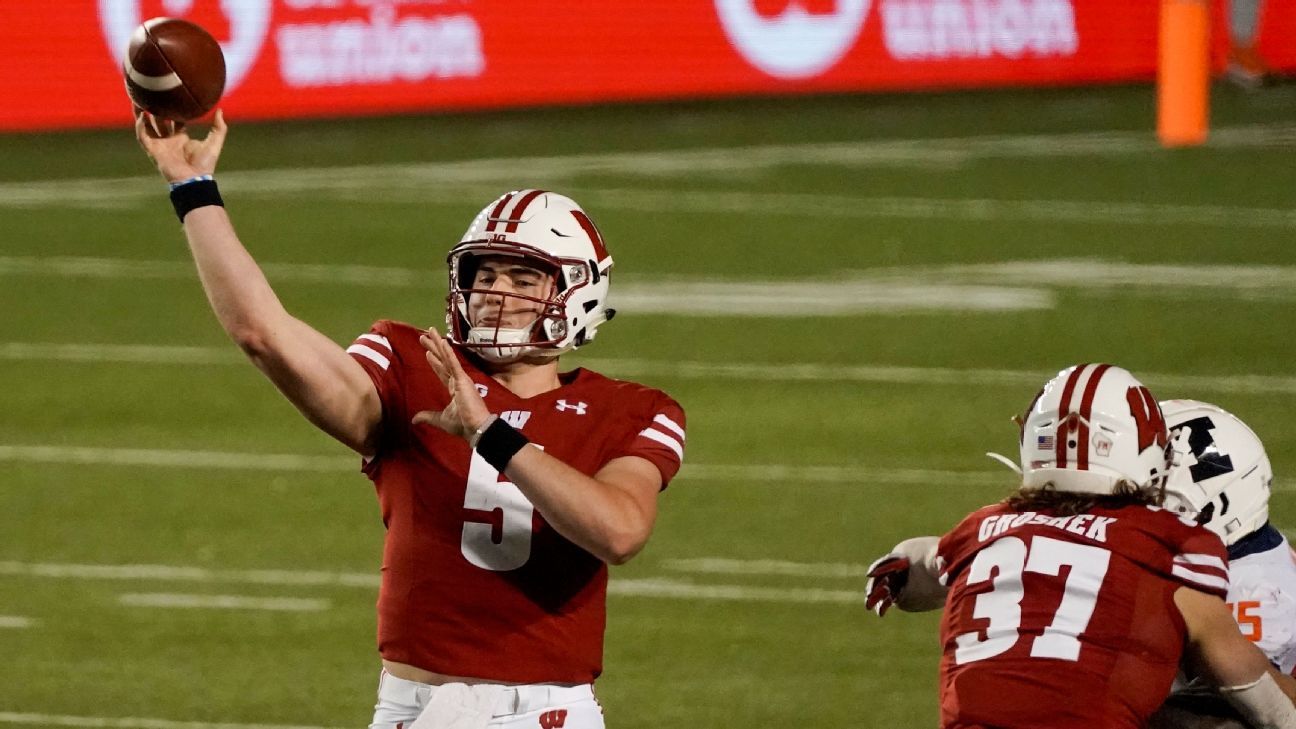 Can you ever remember a season when there were so many undefeated teams this late in the year? Simply unprecedented.

That’s some of that classic football humor.

The Big Ten is back! Welcome, friends.

There’s going to be more football to keep track of, so we’re here to find the best of the day, from uniforms to highlights to a parody political attack ad from Montana State highlighting how its coach, Selfish Jeff, has dominated Montana recently. Don’t be selfish. Stick around.

In his first start, subbing for the injured Jack Coan, former blue-chip recruit Graham Mertz showed he won’t be relinquishing the job any time soon. The redshirt freshman completed his first 17 passes and finished the day 24 of 25 for 248 yards and five touchdowns in a 45-7 rout of Illinois. Wisconsin with a big-time, dynamic quarterback? That could be a scary thought for the rest of the Big Ten. And the Overland Park, Kansas, native impressed his hometown QB, too.

Back in August, the Louisiana program was rocked when beloved 31-year-old assistant coach D.J. Looney died of a heart attack. Looney was the heart of the team, and they’ve been playing for him ever since. Last night, with Looney’s family in attendance and with the players all wearing Looney’s name on the back of their jerseys, the Ragin’ Cajuns snapped UAB’s 21-game home winning streak with a 24-20 win.

Both UCF and Mississippi State are wearing unis that highlight their history with America’s space programs.

To the Maroon and Back!

Meanwhile, back on Earth

Air Force kept it in the atmosphere, but they’re still on up there.

“Uniforms in the wild” has been a CFB social media theme this year and I am here for it. Cleats on this peak make this the peak of this craze. https://t.co/KWN2gi0Icp

Go for the gold

Texas is wearing throwback uniforms as part of a “Retro/Throwback celebration” for its 110th meeting with Baylor. It’ll be the first time Texas has worn this combo at home since a 1950 game against Purdue.

A symbol of unity

Our student-athletes have driven an initiative to wear a solid black Block I decal on our helmets for the season opener at Wisconsin.

The helmet is another example of our student-athletes continued advocacy for social change.

Together, we can make a difference. #JointheFight pic.twitter.com/vq4XQSrUyV

Bird is indeed the word

Both the Illinois Fighting Illini and the Wisconsin Badgers had their eyes on the ball … or a shoe.

This shoe had everyone faked out 😅😂 pic.twitter.com/anB8KNnWQZ

Fans might not be allowed at games this season in the Big Ten, but traditions still remain.

Badgers, you know what time it is…

We’ve all seen the turnover chains and the copycats, but Tulsa has a touchdown hat. Introducing the JUJU hat.

Second touchdown of the night for Corey Taylor!