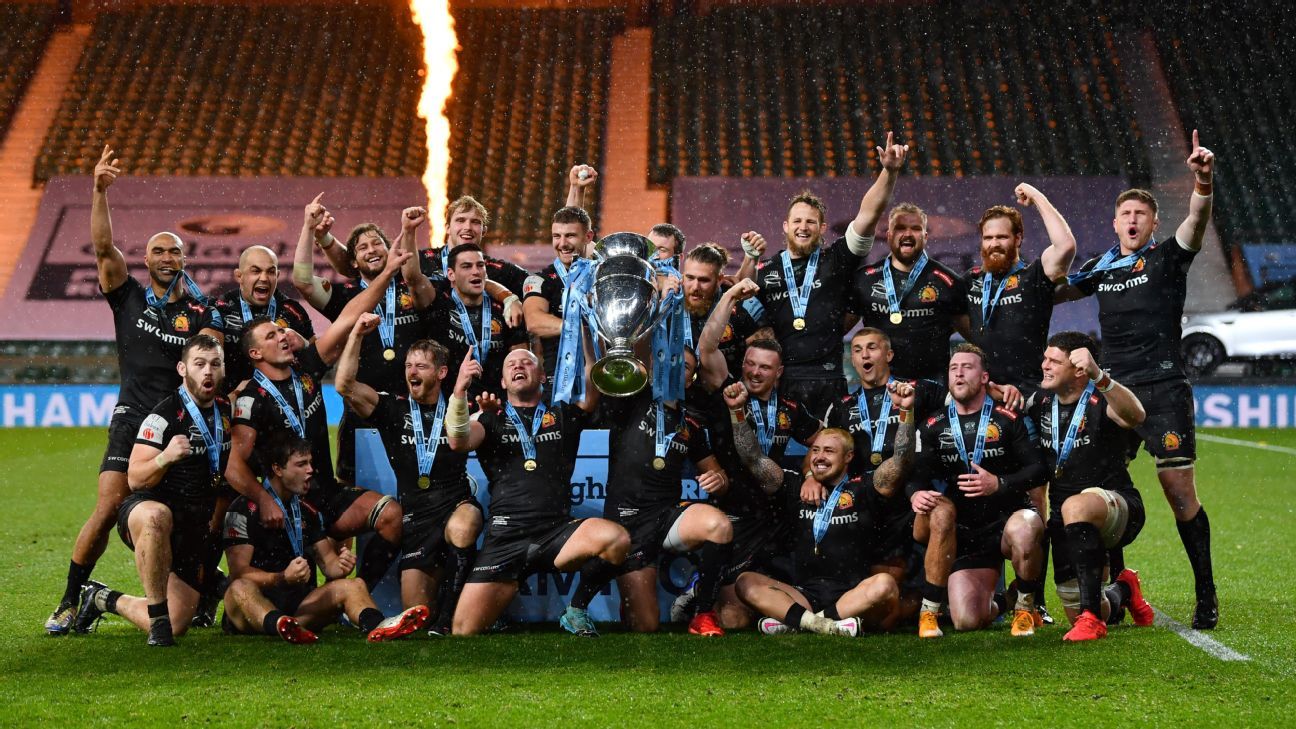 As Joe Simmonds chipped the ball through the swaying posts to seal Exeter Chiefs’ remarkable domestic double, it was just about the only part of the season that went to script. Exeter Chiefs have been the best team in the land since we began this campaign 372 days ago, and their Heineken Cup-Gallagher Premiership triumph is just reward for what was a turbulent and critical 13 months for the sport.

Exeter have been one of the few constants and reliable factors in this sport — they stick to their gameplan of claustrophobia and winning each inch of the field, have their recruitment on point and never seem to get flustered. They kept their heads over the last year, and weathered every curve ball thrown in their way. They trust their process. With five minutes left, and Exeter holding a narrow three-point lead, Wasps won a penalty deep in the Chiefs’ 22. Wasps went to the corner. Gabriel Oghre’s lineout, amid the swirling tempest of Twickenham, was poor and Jonny Gray plucked it out of Wasps’ hands; Exeter won a penalty, then another, then another leaving Joe Simmonds punching night sky nothingness after he struck the last into the darkness of the empty South Stand to clinch a 19-13 triumph.

A year ago today Eddie Jones announced his England squad for their World Cup semifinal against New Zealand. Back then the Gallagher Premiership was one round old. Exeter were some folks’ favourites to win the title, Saracens were much-fancied, too. Fast-forward to Saturday evening at a grim Twickenham as the wind crashed against the seats, the roof creaked, the walkways lay empty and the odd car rumbled past, Exeter put a full-stop on a season like we’ll never see again.

As Exeter danced in Shakespearian rain and celebrated in front of this void of an empty stadium, they at least ensured the campaign had the correct outcome. For all Wasps have brought since they changed head coach back in February — and wow, they have been magnificent under Lee Blackett — Exeter deserved this title and become the sixth team to win the league and European double. Some feat for a team who were promoted to the top flight 10 years ago.

But to put this win in context, and for what the Chiefs have achieved, as they stayed focused amid the chaos, you have to look back at the most turbulent of years. This will be a campaign remembered for the dethroning of salary-cap breaking Saracens, then in March the day the sport stopped and players hastily took pay-cuts as clubs battled with COVID-19. Grim projections followed; the sport felt like it was teetering on a precipice. Players trained on Zoom; protocols were hastily-fast-tracked, as the clubs and players learnt on their feet while the sport’s ‘leaders’ were noticeably absent. Then the sport came back, the stadiums empty. Player welfare was given scant regard in a packed schedule, and clubs tried to keep their bio-bubbles solid. Then came the drama of the last round where Sale had to forfeit their match and it was only Wednesday, four days before the final, that Wasps announced they were going to be able to participate despite a spate of COVID-19 positive results.

But how they competed. Coming into the final they’d won 12 out of 13 under Blackett. They have played some of the best rugby we’ve seen, with the electric Dan Robson and mature-beyond-years Jacob Umaga steering the ship. The turnover merchant Jack Willis — now with 45 for the season, 26 more than the next man in the Premiership — won all the personal accolades and though they were robbed of four players for the final due to COVID-19 protocols, they came so very close to gatecrashing Exeter’s party. Had that lineout gone a different way, it could have been Wasps’ night, but that’s where Exeter’s calmness pays dividends. They ground the second half out 6-3; their foundations are immovable and that is to their eternal credit.

Henry Slade was the best player on the pitch. His kicking out of hand was on point, as he diced between the adventurous and conservative options in these rank conditions, and he dovetailed neatly with Ollie Devoto. But this will be remembered for his first-half try. It was like watching Brian O’Driscoll — he picked on Tom Willis’ outside shoulder and glided through the Wasps’ defence to score. Just like Umaga’s score, the two tries were wonderful moments of rugby beauty in these beastly conditions. The Simmonds brothers, Joe and Sam, were also magnificent, while the Chiefs’ back-row ensured the second half was played out on the halfway line, rather than in Exeter’s half.

It was a crying shame the Exeter faithful were not permitted to watch their team achieve their crowning glory. It was down to the substitutes and non-playing staff to hammer out their Tomahawk Chop song, as it floated on the rain and wind under the night sky. This Premiership final is usually an occasion where you can hear singing in the West Car Park, have the smell of beer and burgers invading every pore, and end up sun burnt. But as Exeter lifted the trophy in front of a handful of Chiefs’ players and staff, this was a celebration of the sport’s ability to somehow keep its head above water.

The 2020 Exeter vintage should go down as one of the professional era’s greatest sides. But while it was won on the night by 23, this was as much a triumph for those brave old souls who stunned Bristol back in 2010, the guidance of owner Tony Rowe, the durability of Gareth Steenson and Ian Whitten, the calm leadership of head coach Rob Baxter and the hundreds of others who have made this side the best in Europe. They are deserved champions and ensured the season retained a touch of sanity, in what has been the most unpredictable, bonkers and ultimately, thrilling season.