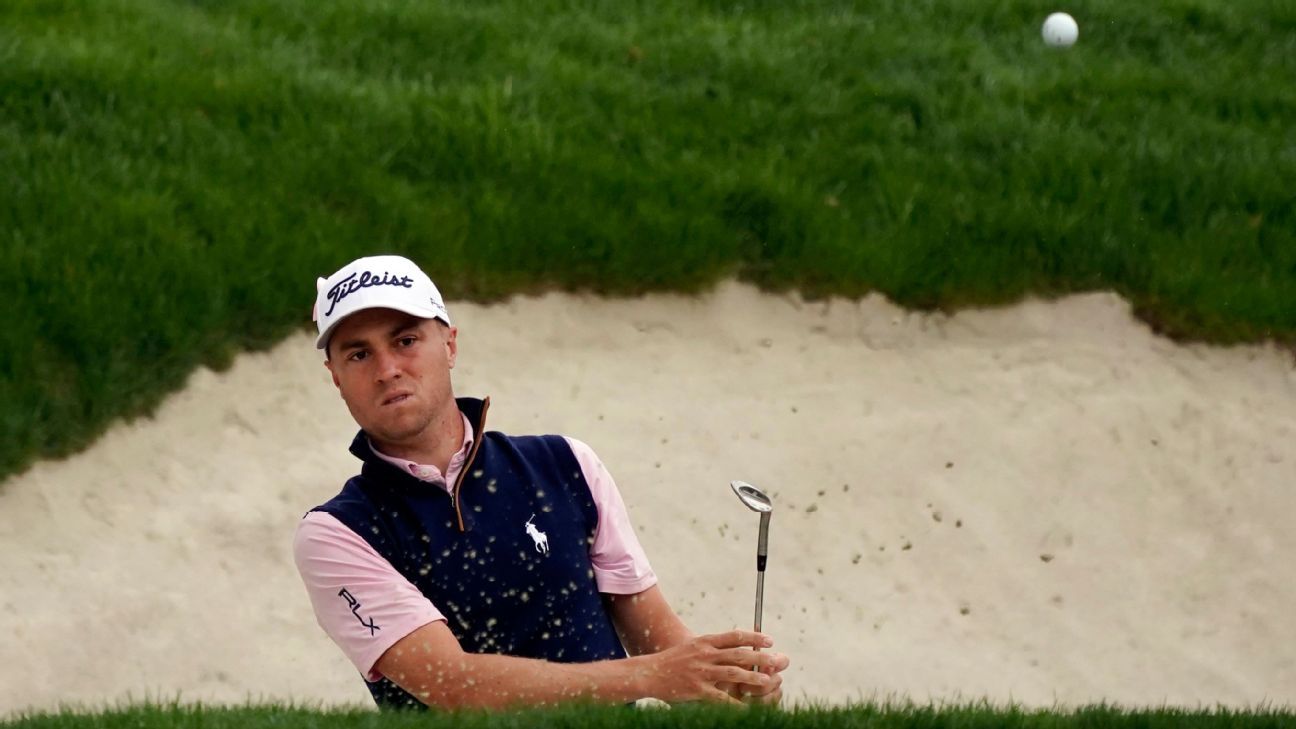 THOUSAND OAKS, Calif. — Tiger Woods will not defend his Zozo Championship title. He basically took himself out of contention through nine holes on Thursday. The 83rd PGA Tour title that would set the all-time record would be pursued another time.

But he will get a final-day pairing with Phil Mickelson, meaning the two golf legends will play in the same group for the 38th time in their careers. Mickelson will tie Ernie Els for the most of any player to be grouped with Woods.

The downside, of course, is that both players are well out of contention. In fact, they will be on the opposite side of the course from the leaders, teeing off on the back nine.

Meaningless in the scope of the tournament, but you know they’ll want to get the best of each other — even if they are 16 shots back of leader Justin Thomas.

The tournament has a nice leaderboard with No. 3-ranked Thomas and No. 2-ranked Jon Rahm in the first two positions — and several other contenders within striking distance, as 11 players are within four strokes of the lead.

The final day of the Zozo Championship offers plenty of possibilities, with the backdrop of many having their eye on the Masters in a few weeks’ time.

Here are a few of the storylines.

Justin Thomas goes for victory No. 14

At age 27, Thomas is already on the verge of a Hall of Fame career. He’s won a major championship, the 2017 PGA Championship. And he’s already won 13 PGA Tour events, including two in 2020, the last coming at the WGC-FedEx St. Jude.

He also tied for eighth at the U.S. Open and tied for the third-lowest total score at the Tour Championship. He leads by one over Rahm.

Thomas considered it a so-so day on Saturday until he birdied the last two holes to shoot 67 and move to the top of the leaderboard.

“It was a good fight, hung in there well,” Thomas said. “I felt like I definitely didn’t play as well as I did the first two days or didn’t have my best stuff by any means, but to shoot a round like that is huge on a course like this. Usually I’m grinding to shoot a 1, 2, 3 under, but here at Sherwood the scores are very low and you need to be able to, as crazy as it is, shoot 5 under to keep pace.”

Thomas has a 54-hole lead or co-lead for the 14th time in his career, but has to contend with Rahm, who has won twice since the restart and briefly held the No. 1 spot in the world.

You’re going nowhere without shooting in the 60s at Sherwood. The long-time home of Woods’ World Challenge event has played easy, averaging 69.048 for three rounds. Saturday’s average of 69.416 was actually the toughest of the three days. You know it’s playing easy when 35 players are 10 under or lower through 54 holes. There were 39 scores in the 60s on Saturday.

Griffin birdied his first four holes Saturday, then bogeyed his last two to fall two shots back of Thomas. It was just about a year ago that Griffin, new to the PGA Tour, came seemingly out of nowhere to win the Houston Open, shooting a final-round 69 to win by a stroke. That victory got him into the 2020 Masters, which will be played in two weeks.

But Griffin quietly kept going, and played well enough to make the Tour Championship, eventually finishing 18th in the FedEx Cup standings. That meant he reserved a spot in the 2021 Masters, too.

“Having the belief that you know that you’ve got it done and you can get it done is nice,” he said. “Playing against Jon Rahm and Justin Thomas is different. It’s a different field, there’s no way around it, so I’m going to have to play really well. I’m aware of that. But it’s fun. This is what I dreamed about, position I dreamed about being in my whole life. From being on mini tours, the Korn Ferry Tour, now to be here playing with the best players in the world in the final group, it’s a lot of fun.”

What’s to gain for Tiger?

Two rounds in the 70s, including the opening-day 76, has Woods in a tie for 68th, way out of contention. He came in with hopes of at least getting into contention so that he could feel what it is like. Not since last year’s Presidents Cup at Royal Melbourne has Woods played with any kind of authority. He tied for ninth at the Farmers Insurance Open, but was not a final-day contender. Since then, it’s been a series of disappointments.

Perhaps the best thing to take out of this week for Woods is his health. He looks the best he has since the restart; he’s played in six tournaments now since the sport came back from the coronavirus-forced break. Woods is moving around nicely, swinging freely, hitting plenty of good shots. Just not enough to contend on a golf course where par is more like 68.

“I’m not even close to even getting in the top-10, but if I can just play well shot for shot and build on what I had yesterday,” he said of his second-round 66 that included eight birdies. “If I can do something similar to what I did yesterday, I’ll have a lot of positives. As I said, I flushed it today.”

That’s the good news. The bad news is there still seems to be the issue of competitive rust. Woods acknowledged it earlier this week and he mentioned the possibility — without prompting — of adding the Vivint Houston Open the week prior to the Masters.

Doing so seems unlikely, but if Woods wants to be competitive in his Masters defense, there is some work to do. It seems he will likely visit Augusta National this coming week. Whether he decides to add the Houston tournament will be of interest.

What will Phil do next?

It was one of those days that sums up Mickelson. He played the back nine — his first 9 holes — with seven birdies and a bogey at the 18th, where he played a shot from a creek-filled gully that fronts the green.

Then he birdied the first two holes on the front side to get to 8-under on his round, with one more par-5 ahead and the possibility of a low round in sight.

And then he hit it in the water at the par-3 third. The resulting double bogey killed his momentum. Mickelson added no more birdies and bogeyed the ninth to shoot 67, leaving him in a tie for 68.

Mickelson has won consecutive Champions Tour events but has had difficulty putting it together on the PGA Tour. He will have a final-day grouping with Woods to get fired up