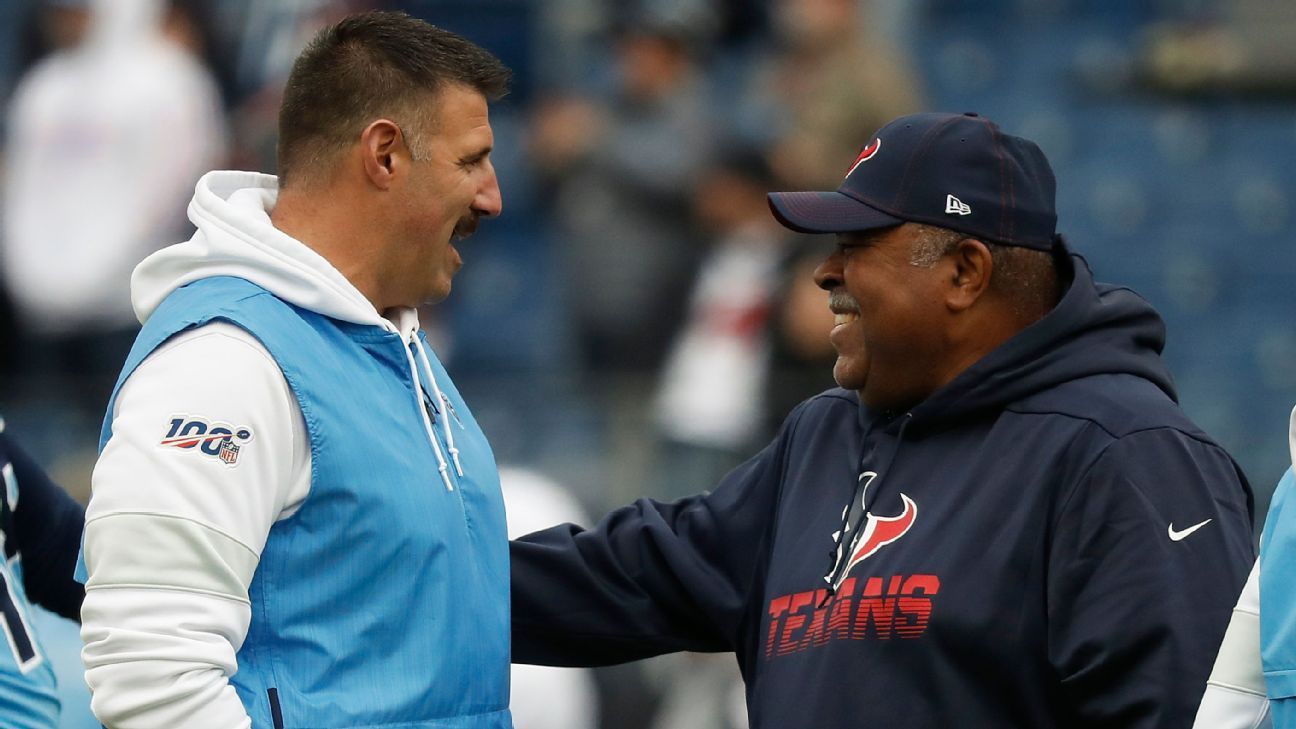 NASHVILLE, Tenn. — Coach Mike Vrabel will face an old friend when the Tennessee Titans (4-0) host Romeo Crennel and the Houston Texans (1-4) on Sunday (1 p.m. ET, CBS). Vrabel played for Crennel, the Texans’ interim head coach, while with the New England Patriots and the Kansas City Chiefs before the two were on the same coaching staff for four years in Houston.

The Titans hired Vrabel to be their coach in 2018 and he now leads arguably one of the NFL’s most physical and mentally disciplined teams. Vrabel absorbed knowledge and insight over the years from a “who’s who” of coaches, including Bill Cowher, Bill Belichick and Urban Meyer. Vrabel includes Crennel on that list.

“When you make stops along the way you have people that have a positive impact on your life. I would say that Romeo Crennel is certainly one of those people,” Vrabel said.

Vrabel keeps in touch with Crennel — who became Houston’s interim coach after the Texans fired Bill O’Brien — to check on him along with his wife, Rosemary, and their family. It was guidance from Crennel, who was New England’s defensive coordinator, that helped Vrabel settle in as a star linebacker for a team that became a dynasty.

As Vrabel reflected on the time when he joined the Patriots after four seasons with the Pittsburgh Steelers, he recalled the “burden of trying to be perfect” that he placed on himself. Vrabel said being too concerned about assignments made him press and mistakes he made would at times carry over to the next play.

“I think it was in Atlanta, something happened and [Crennel] came over, he said, ‘You can’t function like that in life or in this game, especially. You can’t just let it eat at you because you made the wrong tackle, you did the wrong assignment.’ That was great to hear. He brings a calmness and he keeps things in perspective. I’d say he has seen a lot throughout his career,” Vrabel said.

That steadiness that Crennel instilled has been especially useful to Vrabel this season as the Titans navigated through a COVID-19 outbreak. The Titans remained focused on the next game despite the scrutiny and uncertainty surrounding them. The players followed their coach because they trust him in the same way Vrabel did Crennel.

Coaches do more than just put players in positions to make plays. They have to manage people who have different ways of receiving a message. That is something that impressed Vrabel about Crennel.

“[Crennel] has the ability to coach players differently based on what they need,” Vrabel said. “Some may need a father figure, some may need to be coached a little harder, and since I’ve been around him as a player and as a coach, he’s always found the right way to do those things to each and every guy.”

Crennel said it’s hard to tell when a player will eventually become a coach, but that the preparation Vrabel put in as a player stood out.

“He was a very smart player. Very competitive and he studied the game plan,” Crennel said of Vrabel. “He knew what needed to get done to help us win. I think that he’s applying all of those things that he did as a player to his coaching style and to his team, and as you watch his team you see that they are well-coached, you see great effort, and you see production.”

Crennel was the defensive coordinator and Vrabel the linebackers coach when they were hired by the Texans in 2014. Crennel noticed the way Vrabel connected with players and prepared them for games.

“Mike had a good foundation when he got here as far as coaching and how he wanted to coach his players, and how he presented the game plan and how he motivated those guys that practice, Crennel said.”

Vrabel was especially close to linebackers Whitney Mercilus and Jadeveon Clowney. That relationship was a major factor in Clowney’s decision to sign with the Titans as a free agent in September. Clowney said he knew that playing for Vrabel would showcase his ability the most.

“I knew when I was with Vrabel in Houston, I was second-team All-Pro and three Pro Bowls. Mike Vrabel is one of the smartest coaches I ever had,” Clowney said after he signed with the Titans. “He knows football and how to put guys in position to make plays. That’s what he did in Houston and when I got here. He is already lining me all over the place, and I get to keep making plays. He believes that I am a playmaker. With Mike Vrabel, I made way more plays than I did when I was in Seattle.”

The ability to connect to players came naturally for Vrabel. That helped make him an outstanding recruiter when he was an assistant coach at Ohio State. It’s no wonder Vrabel is close to his players now and the Titans are always prepared for games.

“He’s doing the same thing, but he has a whole team now rather than a position group and he motivates the team,” Crennel said. “His preparation as a player carried over to coaching because he coached in college a couple years before he got to the pros. He just honed that skill and he continues to hone that skill with every opportunity that he gets.

“He lets them know what his expectations are, and he holds them accountable for those expectations. It looks like they’re buying into what he’s preaching.”

Scotland warm up for Wales with easy home win over Georgia
Transfer Talk: Barca could move for PSV’s Malen if Depay not an option
Lewis Hamilton: ‘No concern’ he will sign for Mercedes next season – team boss Wolff
Partey 8/10, Aubameyang 7/10 in comeback Europa League win
Premiership final: Wasps missing 11 players