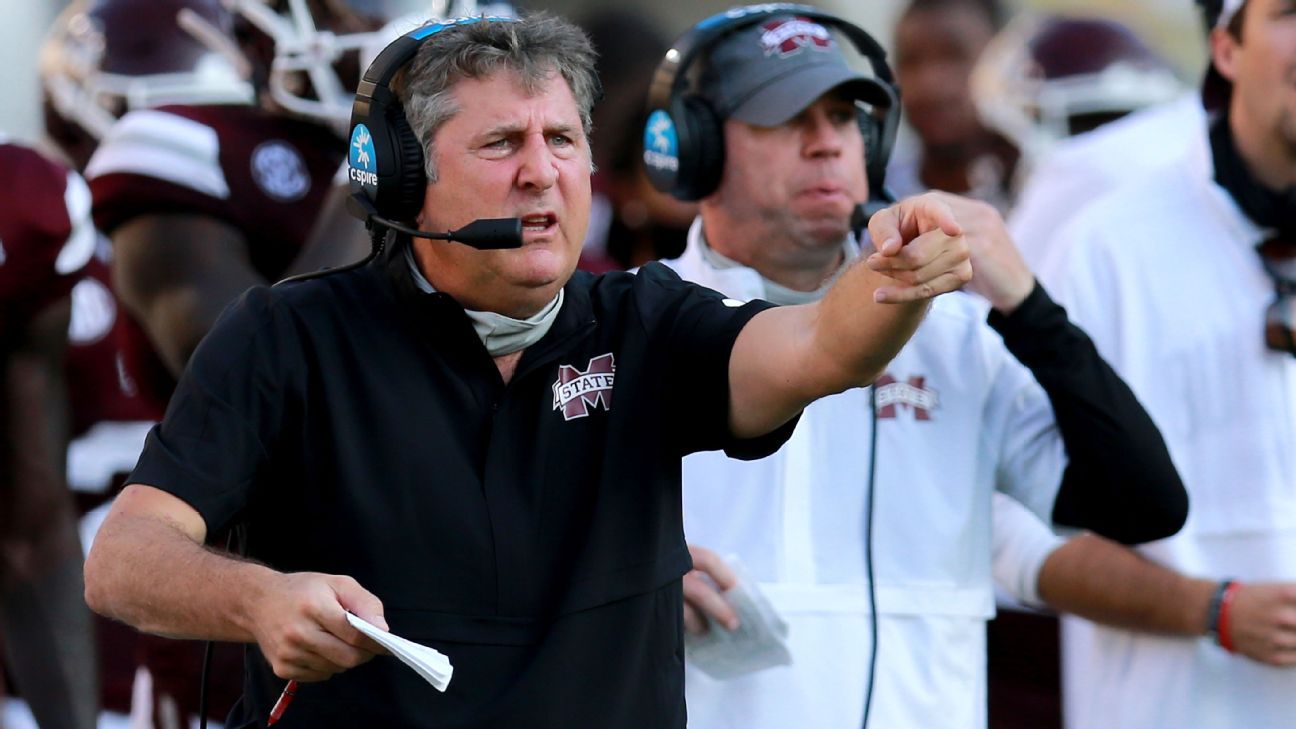 What do we truly love about this game? Name it. Any image you dreamed of during this long, winding, stress-filled offseason — it happened Saturday.

Need a stunning upset? We give you Kansas State, erasing a 21-point deficit and shocking No. 3 Oklahoma for the second straight year.

Need one of those “only in college football” storylines to root for? There is now a reasonable case to be made that Elijah Moore‘s decision to mimic a dog urinating in the end zone late in last year’s Egg Bowl represented a tear in the space-time continuum, some alternate universe where a pirate (Mike Leach) and a Stanford QB (K.J. Costello) move to Starkville and upend the league by topping the defending champs.

Want to watch Texas squash the hopes of its fans for another year only to resurrect them, all in a miraculous, three-minute stretch that seemed stunning even by Big 12 standards? Saturday had that, too.

Saturday also gave us Mac Jones solidifying his role as the leader of Alabama’s offense, Kyle Trask torching Lane Kiffin’s defense, Georgia flipping through a rolodex of quarterbacks before landing on the last guy anyone was expecting, a kicker nailing a game-winner from 53 yards, a brutal officiating call creating havoc a top-25 SEC showdown (Kentucky vs. Auburn), and Miami delivering a blowout win against archrival Florida State.

Yes, Saturday was like old times — weird, surprising, dramatic — a dash of nearly everything we’d been missing since LSU hoisted the trophy in January.

Start in Oklahoma, where for three years Lincoln Riley has been less a coach than a shaman, a man whose mere presence on the sideline could conjure Heisman contenders from thin air. Perhaps Spencer Rattler will still blossom into a genuine superstar, but on Saturday, he threw three picks — the first time a Sooners QB has done so since 2014 — as Kansas State pulled off the stunner.

Move to Baton Rouge, where perhaps we should have expected a sizable step back for the defending champs, who bore virtually no resemblance to the team that etched its name across the college football record books a year ago.

Mike Leach’s debut in the SEC was a marvel. The LSU defense had no answer for Costello, who threw for 623 yards, or Kylin Hill, who rushed just seven times but hauled in 183 receiving yards in Leach’s Air Raid offense.

Click over to see Louisiana kicker Nate Snyder, struggling so badly his coach didn’t trust him to connect on a 32-yard try in the first quarter, drilling a 53-yard game winner to keep the Cajuns undefeated. Who doesn’t love a nice kicker-makes-good story?

Check out Auburn’s new offensive era (fit with a more experienced Bo Nix at QB and Gus Malzahn in a shirt-and-tie tribute to Pat Dye) open with a win, while Kentucky fans spend the aftermath dreaming up imaginative places the officials can stuff their electronic whistles.

Sit back and smugly giggle about the tweet you just typed, mocking Texas for its latest catastrophe as the Longhorns trailed by 15 with 3:13 to play and ESPN’s metrics gave Texas Tech a 99% chance of winning, then scramble for your keyboard to delete that same tweet when Texas converts a two-point try to tie it with 40 seconds to go.

This was the Saturday we didn’t know we so desperately needed. It felt right. It felt good. It felt like old times.

Who says they play great defense in the SEC? That wasn’t exactly on display Saturday, but perhaps we can chalk up the high scores to some terrific QB performances.

Costello got a ton of love, throwing for five touchdowns. But LSU was without Derek Stingley Jr. Hard to imagine Costello topping 500 yards with Stingley in the game, right?

At Florida, Trask threw for 416 yards and six touchdowns. Only Danny Wuerffel and Chris Leak had ever compiled six passing touchdowns for Florida in a game. That’s pretty good company.

No. 5 Florida QB Kyle Trask plays out of his mind with a six-touchdown game, as the Gators defeat Ole Miss 51-35 in the season opener.

Or how about Nix at Auburn? In his first game with new offensive coordinator Chad Morris, Nix delivered three touchdown throws, something he managed just once last year.

So, who did it best? Clearly the nod has to go to Nix because, in addition to his passing stats, he also added 77 yards punting. In today’s game, it’s important to be versatile.

Remember when Jamie Newman was the answer at Georgia? That feels like a long time ago.

When the Bulldogs kicked off Saturday at Arkansas, Newman wasn’t there — he opted out last month — and the seeming second option, JT Daniels, wasn’t cleared to play. That left D’Wan Mathis to get the start, but he struggled, too — finishing 8-of-17 for 55 yards and a pick.

So, that is bad news when you’re down to your fourth QB, right? Not for Georgia.

Stetson Bennett IV — a man whose name sounds like he should be a billionaire and whose nickname is “The Mailman” based on some curious hat choices during a recruiting camp years ago — entered in relief and finished strong, completing 20-of-29 throws for 211 yards and two TDs. Georgia rallied for 32 second-half points and, in turn, avoided a stunning embarrassment.

But does that mean Bennett is the starter moving forward?

Kirby Smart wouldn’t say after the game, which shouldn’t come as much of a surprise given the secrecy that has surrounded the position for months. Still, unless Daniels is cleared and shows up to practice wearing a Lincoln-esque stovepipe hat, we’ll be pulling for Bennett to get at least one more crack at the gig.

It’s an old coaching cliché that you play until the whistle, but Syracuse and Pitt both managed to prove there’s value in the rhetoric.

The Orange opened their scoring against Georgia Tech when the Yellow Jackets thought they had Sean Tucker down at the 25-yard line, but nope. Tucker’s knee never touched, he rolled over a defender, got up and sprinted for the TD.

Sean Tucker gets pulled down, but never actually hits the ground, and books it for a 38-yard Syracuse touchdown.

Not to be outdone, Pitt’s Taysir Mack was pulled down by the Louisville defense at virtually the same spot on the field, twisted over the defender without ever touching the ground, got up and scampered into the end zone, too.

Louisville defenders nearly bring Taysir Mack to the ground, but Mack plays on and chugs 40 yards to the end zone for a Pittsburgh touchdown.

ESPN’s SP+ had 91 teams ranked entering Week 4. The No. 90 team was Louisiana-Monroe. The No. 91 team was UTEP. And, in gloriously ugly fashion, the two went head-to-head Saturday.

Lest you think the Miners didn’t take genuine offense to their dead-last ranking, however, you were in for a surprise.

UTEP dominated the game, jumping out to a 24-0 lead and finishing with a 31-6 win. It was UTEP’s largest margin of victory since 2016, and the Miners are now, unbelievably, 3-1 on the season. Sure, two of those wins are against FCS opponents, but let’s not split hairs. UTEP had just two wins in the previous three seasons combined.

We’re only ranking guys who’ve played, so sadly, we’re not yet able to include Ohio State QB Justin Fields. Let’s dig in …

An off week for the Tigers, which hopefully allowed Lawrence to spend some extra time on conditioning. And by that we mean using extra conditioner on his luxurious hair.

Yes, a lot had to go right for Ehlinger to even get the chance to stage a dramatic come-from-behind win against Texas Tech, but the guy still delivered when it mattered most, finishing with 332 total yards and six touchdowns.

Pick the winner of 10 college football matchups each week. Play straight up or confidence. Make Your Picks

Costello is probably the most purely talented QB Mike Leach has ever coached, and boy that looks like it will be a fun combination this season. Joe Burrow’s records are probably safe due to the abridged season, but Costello is going to put up some numbers in 2020.

When the phrase “the first time since Danny Wuerffel” comes into play, you’ve had yourself a good game. Trask threw for 416 yards and 6 TDs in the Gators’ win over Ole Miss, leading Florida to its most yards in a conference game in school history.

He went over 300 total yards in his rivalry debut against FSU, though Seminoles fans probably didn’t notice since, if they had any sense of self-preservation, they switched over to “A Madea Halloween” halfway through the first quarter.

Under-the-radar play of the week

Because of the COVID-19 pandemic and a handful of injuries, Charlotte had to nix a second straight game Saturday, but head coach Will Healy didn’t let the day go to waste.

The 49ers got together for Wiffle ball, golf and a little 7-on-7 football to build camaraderie amid a tough start to the season.

The highlight of the day? Healy’s dad Rob, who ran for a score. Not bad for the former Georgia Tech QB.

Coach Healy’s dad, a 3-year starter at Georgia Tech, found one more day of eligibility to punch in this red zone score.

Under-the-radar game of the week

The most entertaining player few fans have actually seen this year is probably Liberty QB Malik Willis. The Auburn transfer turned in another stellar game, throwing for 285, running for 85 and tossing two TDs in what turned out to be a dramatic showdown with Florida International. The game featured a 100-yard kickoff return on the opening kick, five lead changes and a dramatic finish, with Liberty up eight with 4:30 to play when D’vonte Price hauled in a TD pass. The two-point try failed, and FIU couldn’t do anything on its final drive, helping the Flames move to 2-0.