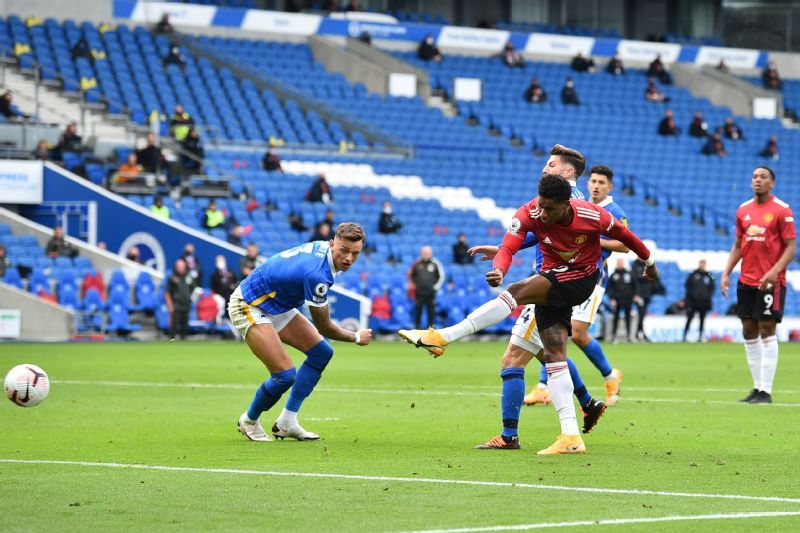 Manchester United earned a dramatic 3-2 victory over Brighton with a Bruno Fernandes penalty awarded after the full-time whistle on Saturday.

Neal Maupay scored Brighton’s first goal of the game with a penalty in the first half which he delicately chipped into the goal while Marcus Rashford hit the target for United and Lewis Dunk scored an own goal.

Solly March thought he had earned the side a point with a last minute goal but Bruno Fernandes polished off a penalty on 100 minutes after a Maupay handball to secure United’s first win of the season.

Brighton shot out of the blocks at the Amex with Leandro Trossard hitting the post after just eight minutes with a left-footed shot.

The post was to prove to be Brighton’s downfall with three shots in the first-half — two from Trossard — rebounding off either side of David de Gea‘s goal.

Despite Brighton’s better start, it was United who found the back of the net first with Mason Greenwood on 33 minutes. However, replays show Rashford was offside in the build up and the goal was disallowed.

Brighton finally caught their break seven minutes later when Fernandes gave away a penalty for a clumsy challenge on Tariq Lamptey.

Maupay stepped up to take the spot kick and drifted a slow chip into the middle of the goal while De Gea dived to the left.

Brighton’s lead only lasted three minutes though after a Fernandes free kick from outside the box was put in by Dunk for his fifth own goal in the Premier League as he battled with Harry Maguire.

It was a busy day for referee Chris Kavanagh. Two minutes into the second half he awarded a penalty to Brighton after Aaron Connolly went down under a challenge from Paul Pogba. The decision was then overturned after VAR replays showed that the Ireland international stepped across Pogba.

Rashford thought he had put United ahead on 52 minutes but he was offside when Greenwood crossed the ball to him and the goal was disallowed.

Rashford made up for it three minutes later though with a beautiful display of individual skill. A pass from Fernandes on the left sent him running into the box. He dummied and danced around the Brighton defence before hitting a left-footed shot into the net.

Brighton battered United defence in the final stages and March thought he’d got an equaliser with his close-range header at the far post found its way into the back of the net.

It wasn’t to be Brighton’s day, however, and an outstretched arm from Maupay saw the home side give away a penalty after the final whistle was blown.

Brighton thought they had survived the last minute drama when March cleared Maguire’s header off the line and the final whistle went.

However, VAR replays showed that Maguire’s shot had hit Maupay’s raised hand before being cleared off the line. Kavanagh returned to the pitch from the sideline TV and awarded a penalty to United.

Fernandes stepped up to take it and in the final act of the game hammered the ball into the right-hand corner on the 100th minute.

Azarenka, Sabalenka to vie for Ostrava Open title
Nationals re-signing Harrison to one-year deal
How the Wallabies plan to get back on track in Sydney
Can Tiger Woods find his missing game in time for the Masters?
Sarfaraz Ahmed trumps Azhar Ali as Sindh win, Hussain Talat 253 routs Northern