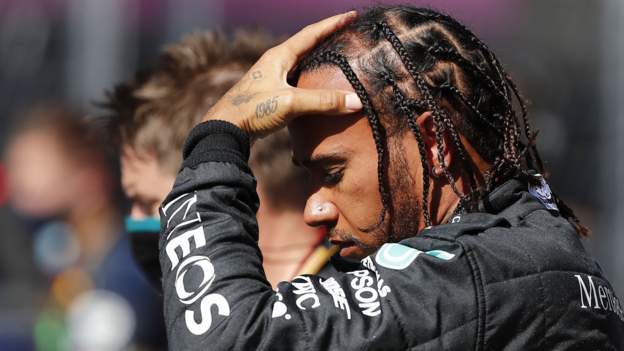 Formula 1 bosses have rescinded the penalty points they had given to Lewis Hamilton for breaking practice-start rules at the Russian Grand Prix.

The two penalty points handed to Hamilton had moved him to within two of an automatic one-race ban.

Instead, Mercedes have been fined 25,000 euros (£22,816) on the basis the team gave the instruction not to do the practice start in the designated place.

Hamilton was also given a 10-second penalty, which cost him victory.

Hamilton had earlier called the decision to give him penalty points “ridiculous”.

And Red Bull’s Max Verstappen agreed that it was “a bit harsh”.

It is a rare U-turn by the stewards of the FIA, who usually only change decisions in the face of an appeal by a team.

Hamilton said in his television interviews after the race that the 10-second penalty was excessive, adding: “It is to be expected. They’re trying to stop me, aren’t they?”

But when asked in the official news conference whether he meant the stewards were out to get him to liven up the championship, he added: “I don’t necessarily think it’s for me.

“Whenever a team is at the front, they are under a lot of scrutiny, everything we have on our car is being triple checked and triple checked, they are changing rules, such as the engine regs, lots of things to keep the racing exciting, I assume.

“I don’t know if the rules in terms of what happened today was anything to do with it, but naturally that’s how it feels. It feels we’re fighting uphill. But that’s OK. It’s not like I haven’t faced adversity before.”

FIA race director Michael Masi later explained: “If Lewis wants to raise something, as I have said to him before and all the drivers numerous times, the door is always open. I am more than happy to discuss anything.

“But from an FIA perspective, we are there as a sporting regulator to administer the regulations.

“We have the stewards as an independent judiciary and therefore there was an infringement and it doesn’t matter if it was Lewis Hamilton or any one of the other 19 drivers, they will consider it on its merits and adjudicate equitably and fairly in the circumstances.”

Hamilton twice made practice starts during the reconnaissance laps before the cars form up on the grid at the very end of the pit lane where cars rejoin the track, rather than in the usual place at the end of the garages.

The penalty came at the end of a fraught weekend for Hamilton, who came within one second of starting 15th following a series of errors in qualifying.

And it meant he was unable to match Michael Schumacher’s record of 91 Grand Prix victories until at least the next race at Germany’s Nurburgring on 11 October.

Doc Emrick ending career as voice of hockey
Trevor Lawrence throws for 5 TDs in one half and more top 25 takeaways and Week 7 must-see moments
Cyborg chokes out Blencowe for first submission victory, retains Bellator title
Timothy Bradley on Teofimo Lopez: ‘He kind of reminds me of a young Roy Jones Jr.’
Barrett back as All Blacks make five changes