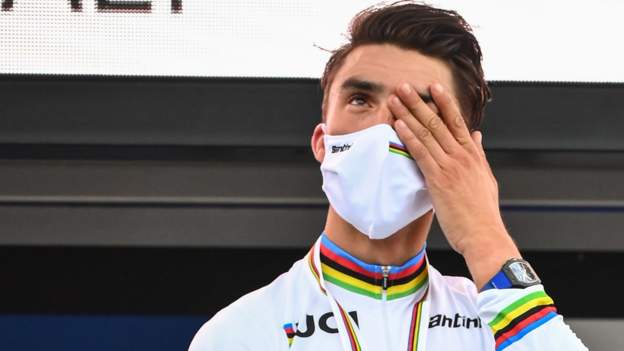 The Frenchman joined many of cycling’s greats in claiming the rainbow jersey in the 258.2km one-day race.

Alaphilippe, 28, beat a chasing group containing many of the world’s in-form riders by 24 seconds.

He burst into tears as he crossed the line, just as he did when he won stage two of the Tour de France – remembering his father, who died in June.

A great ride from a favourite of the peloton

Alaphilippe, who wore the yellow jersey for two days during the Tour earlier this month, broke away from the peloton with about 17km to go with typically aggressive riding.

A group containing Jakob Fuglsang of Denmark, Michal Kwiatkowski of Poland, Wout van Aert from the Netherlands and Switzerland’s Marc Hirschi followed off the peloton and sought to hunt Alaphilippe down.

But the Deceuninck-Quick Step rider’s supreme descending skills ensured he managed to hold an average gap of about 10 seconds between himself and the group – many of whom have won major races this season.

“It was a dream of my career [to win this race],” said a breathless Alaphilippe. “It’s hard for me to say something, but thanks to all my team-mates who believed in me today. Everybody did a great job.”

As Alaphilippe descended the Cima Gallisterna and neared the finish he became more and more animated, not knowing how much time he had over his rivals.

The course, in the Emilia-Romagna region of northern Italy, suited his riding style and capabilities – similar as it is to races he has won before, including the one-day ‘monument’ Milan-San Remo last year.

The venue for the Road World Championships, run by cycling’s world governing body the UCI, was switched late on at the 11th hour because original host nation Switzerland could not hold the event in Aigle-Martigny given government restrictions around the coronavirus pandemic.

How did the Britons get on?

Pidcock, who last week signed with the Ineos Grenadiers for the 2021 season, said: “That was one hell of an experience. We didn’t get the result, but we’re a young team and we’re here to learn.”

Pidcock fought for position near the front of the peloton alongside GB’s road captain Luke Rowe, also of Ineos, until about 30km to go before the team’s challenge faded on the course made up of 28.8km laps.

“Luke did a good job keeping at the front. It’s valuable for the future. It’s just a matter of time to get the legs and endurance to race the full distance instead of just riding the last lap.”

He broke away from the peloton impressively with around 40km to go in a bid to tire rivals out and set up a win for countryman Primoz Roglic, whom he dramatically beat to the Tour title just a week ago.

Cycling’s next Grand Tour event is the Giro d’Italia on 3 October.