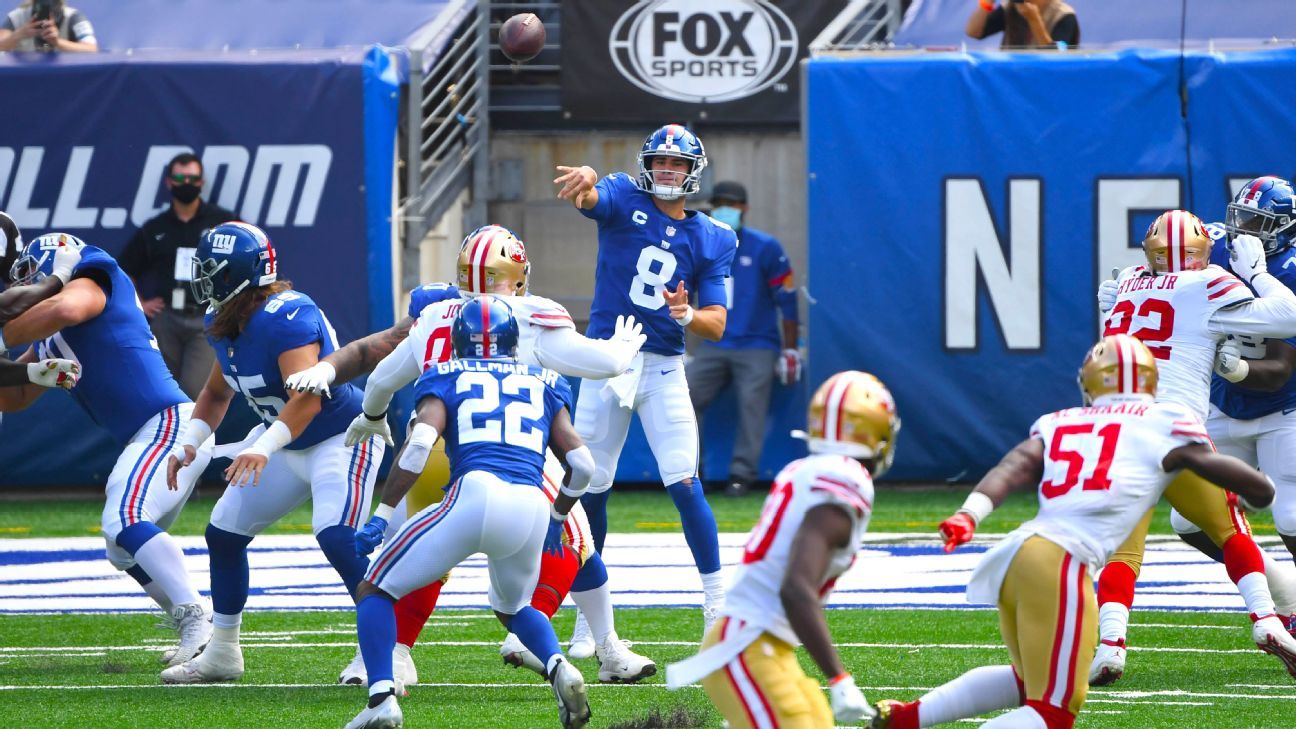 EAST RUTHERFORD, N.J. — Another disappointment. There really is no other way to say it for quarterback Daniel Jones and these New York Giants.

They are now 0-3 in Joe Judge’s first season as head coach after a 36-9 loss to the San Francisco 49ers at MetLife Stadium. Jones has six turnovers in 12 quarters already, with two more coming Sunday. He was charged with a fumble on a poor pitch to tight end Evan Engram in the second quarter and threw a costly interception late in the first half.

At some point, this has to stop. No team can overcome two turnovers from their quarterback on a weekly basis. Jones is on pace for a inexcusable 32 turnovers this season, after spending his offseason trying to reduce the miscues.

It does make you wonder if Jones really is the long-term answer for the Giants at quarterback. It’s a question this team will face unless Jones at some point cuts out the turnovers.

Surely the Giants’ struggles and Sunday’s loss is not all on Jones. The Giants allowed 36 points, no punts and no turnovers to a 49ers offense starting backup quarterback Nick Mullens, without its two top pass-catchers (George Kittle and Deebo Samuel) and minus its first two options at running back (Raheem Mostert and Tevin Coleman). That’s only possible by committing costly third-and-long penalties and missing key tackles like the Giants did in this latest debacle.

This will be quite the test for the Giants. Safety Julian Love thought it was “a weak-minded thing to be able to spiral and to dwell on the unfortunate things that have happened in the past.” Well, this is the fourth straight season the Giants appear to be among the league’s worst teams. Can they, at some point, turn it around?

Troubling trend: The Giants haven’t beaten a team over .500 since Week 13 of 2018 season. The 49ers (2-1) weren’t over.500 coming into this game, but they are a quality team having reached the Super Bowl last season. Still, the Giants were outclassed on Sunday. This continues a disturbing trend against quality competition.

The Giants haven’t beaten a team better than .500 since defeating the Bears in overtime during Week 13 of the 2018 season. That was the last game that Odell Beckham Jr. ever played for the team. The Giants couldn’t beat Mitchell Trubisky and the Bears and a 49ers team starting a backup quarterback over the past two weeks. So where does their first win actually come?

The Giants came into Sunday last in the NFL averaging 52.0 yards rushing per game.

Biggest hole in the game plan: Where is the running game? Sure there is no Saquon Barkley. He’s out for the season with a knee injury.

But this was a 49ers defense that lost half its front four last week, including star defensive end Nick Bosa. The Giants should’ve been able to do something with the combination of Wayne Gallman, Dion Lewis and Devonta Freeman. That wasn’t the case. They combined for 17 yards on 10 carries.

This is not what you expected from the Giants running attack through three weeks with Jason Garrett as the offensive coordinator. He hasn’t been able to draw up anything with this offensive line to create holes for the running backs, whether it be Barkley, Lewis, Freeman or Gallman.

The way the playing time shook out in Sunday’s loss to the 49ers, it was basically a three-man committee. Lewis who took the most snaps with 19, followed by Gallman (17) and Freeman (14).