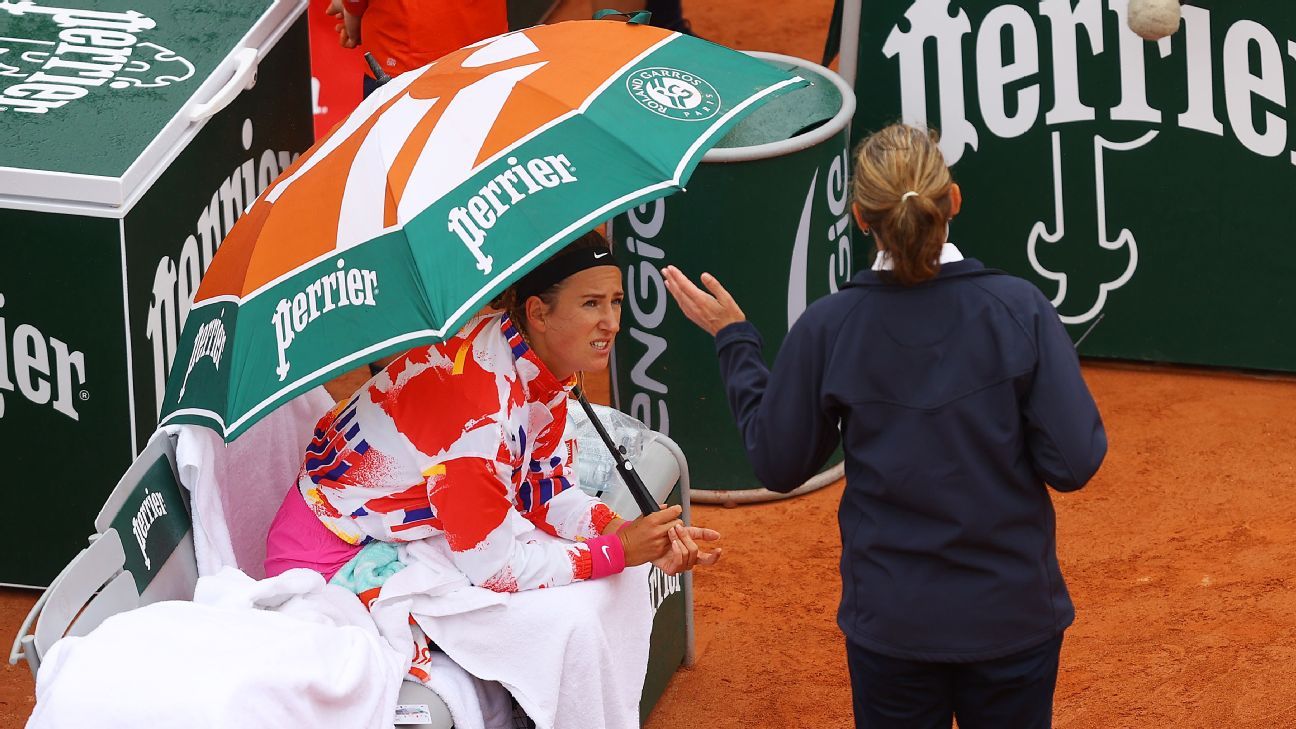 Victoria Azarenka and her opponent Danka Kovinic briefly walked off the court during a rain delay during their opening round match at the French Open on Sunday.

Play was stopped after three games on Court Suzanne-Lenglen, and the players were instructed to stay on court. However, they both were unhappy with the cold temperatures and made it clear they would rather wait indoors.

“I’m down to play whatever,” Azarenka said to an official while sitting under an umbrella on her chair. “You know I’m not complaining here, but this is getting a little bit ridiculous.”

The official then asked if she would be willing to wait for a few minutes, and the No. 10 seed was clear with what she wanted to do.

“No, I’m not waiting here a couple minutes because I’m cold. It’s eight degrees. I live in Florida, I’m used to hot weather.”

She then walked over to Kovinic, and asked what she wanted to do.

“Do you want to wait on court? No? It’s ridiculous. It’s too cold. What’s the point? Sitting here like ducks.”

The two then left and play was suspended on the court.

They returned about 50 minutes later and Azarenka won the match, 6-1, 6-2, and advanced to the second round. Rain is in the weather forecast for six of the next seven days in Paris.

The French Open was moved from its traditional spring dates due to the global coronavirus pandemic. Play got underway on Sunday, and the tournament will run through Sunday, Oct. 11.

Azarenka, the former World No. 1 who played in the US Open final earlier this month, had previously complained about the decision to allow a limited number of fans at Roland Garros.

“I don’t know why we’re trying something new because obviously we already had one Grand Slam in front of us [the US Open] where it seemed like things worked out well [with no spectators]. I guess we always need to try something new for no reason.”

Otaegui secures win at Scottish Championship
Where and when to watch DC vs CSK live match at 7.30 PM IST on October 17, 2020
Jaguars in the Trevor Lawrence sweepstakes after another embarrassing loss
The two lives of Brian Ortega: From menacing streets to UFC stardom
Transfer Talk: Man United given new hope in Sancho chase