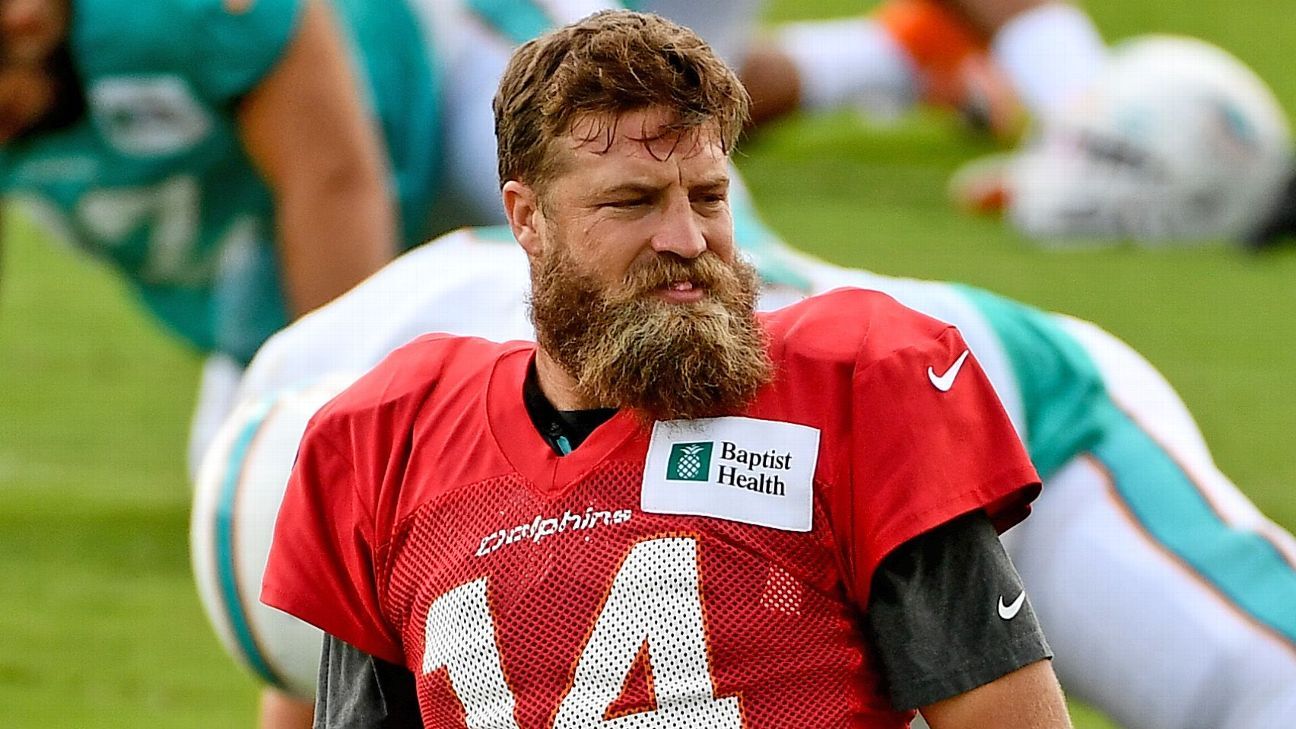 JACKSONVILLE, Fla. — Thursday night’s game between the Miami Dolphins and Jacksonville Jaguars can certainly be called the “mane” event.

When it comes to the quarterbacks, anyway, because Ryan Fitzpatrick and the NFL’s best beard will face off against Gardner Minshew and the league’s most recognizable mustache at TIAA Bank Field (8:20 p.m. ET, NFL Network) .

If you have no allegiance to either team, it might be tough for you to pick your side (burns): full beard or mustache?

Are you Team Grizzly Adams or Team Burt Reynolds?

Blame Fitzpatrick for starting the beard versus mustache debate. He was asked on Tuesday about the game, and Fitzpatrick joked about it being a contest between the two.

“The mustaches versus the beard. … I think the beard is a cooler look,” Fitzpatrick said. “I think guys that grow mustaches a lot of times have patchy sides for their beards so they just stick with the mustache.

“My wife appreciates the mustache trimmed up a little bit more. But she does hate the beard, too, so I guess that’s a lose-lose for me.”

Fitz just dunked on Minshew Mania: “The mustaches versus the beard…I think the beard is cooler. Guys that grow mustaches have patchy sides.” pic.twitter.com/b2iLbuGJb9

Minshew said he didn’t feel the need to defend his mustache, which is technically a horseshoe since it drops below his mouth on either side, but did add that he has had a full beard before — the implication being that he looked damn good with it, too.

“I’ll let [his mustache] speak for itself,” Minshew said. “I think I’ve shown I can grow a beard with no patchy sides.

“But, you know, I’m going to have respect for my elders, especially when they’re much, much elder. Be respectful.”

Jaguars defensive end Josh Allen naturally is going to support his teammate, but he did admit that he likes Fitzpatrick’s beard and the way it spills out over the chinstrap of his helmet.

“I was just thinking about that yesterday. I was looking at it, and this dude does have a really good beard,” Allen said. “But you can’t beat a ‘stache, though. You know what I mean? Gardner doesn’t just have a little [mustache] — he rocks his. You’ve got a lot of guys that try to do the little thing Gardner does, and it just doesn’t look right. So I feel like everybody can rock a nice beard. I’ve got me a little beard. It’s not like his [Fitzpatrick’s], but I rock mine.

“A lot of people can’t do what Gardner does, so I’m going to have to rock with my dog and keep that mustache game going.”