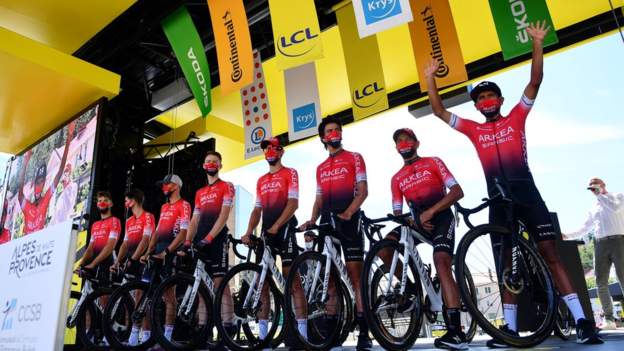 French cycling team Arkea-Samsic says it will take action if an investigation into alleged doping offences during the Tour de France finds evidence of wrongdoing.

“A search did take place last week in our hotel,” Hubert said.

“The team, its general manager as well as its staff are absolutely not questioned and consequently are not kept informed of any element relating to the progress of the investigation, which I remind you that it is not targeting either the team or its staff directly.

“We obviously support our riders, but if it turns out that at the end of the current investigation, evidence confirms the veracity of doping practices, the team will immediately dissociate itself from such acts and take the necessary measures to put an end to the links with unacceptable methods.”

Arkea-Samsic competed in the Tour, which finished on Sunday, with a wildcard entry and was led in the race by Colombian star Nairo Quintana.

The 30-year-old – who had three times finished on the podium in previous Tours – suffered a crash on stage 13 and then cracked on the Grand Colombier two days later before finishing 17th overall.

World governing body the UCI said it had been in contact with the police over the investigation.

A statement read: “The UCI welcomes and supports the action of all parties involved and will take the appropriate measures once it has taken note of the information obtained by the French legal authorities.”