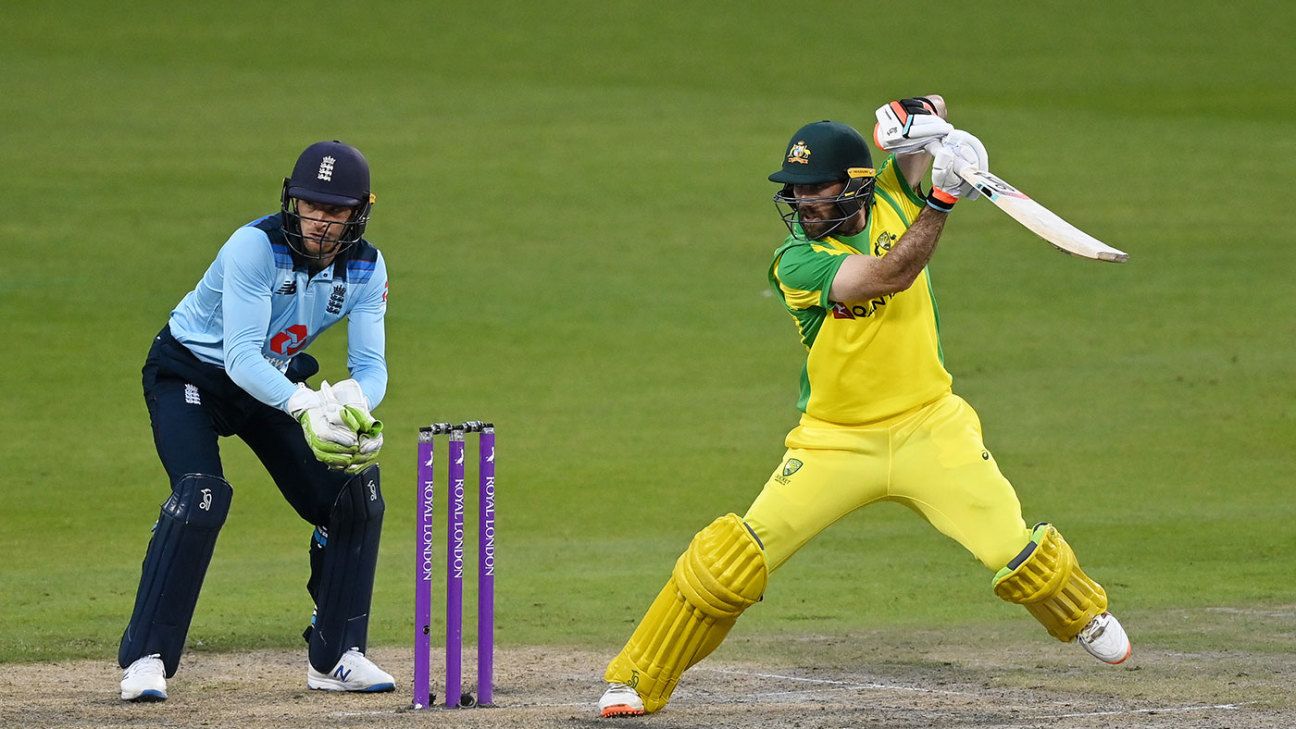 Melbourne’s lockdown, in the cause of stemming the Covid-19 pandemic, has taken much away from a previously vibrant city. One thing it has gifted Australian cricket, however, is clarity about the role Glenn Maxwell is playing for the ODI team, a little more than a year after the absence of same contributed to a deeply disappointing World Cup campaign.

It has been demonstrated in devastatingly effective fashion for Australia on the road against the world champions, inflicting England’s first ODI series loss at home since 2015. In games one and three in Manchester, Maxwell produced a pair of counter-attacking innings from No. 7 that left Eoin Morgan’s side without a riposte, and at the same time confirmed that yes, Maxwell does have a highly significant and consistent part to play for Australia over the next four years to the 2023 World Cup in India.

In partnership with Alex Carey, who also shored up his flagging international fortunes since a productive World Cup, Maxwell unleashed a century of power but also presence of mind, demonstrating a level of peace and self-knowledge that had appeared absent from his game for much of the preceding few years. It was the product of careful consideration with limited–overs captain Aaron Finch.

ALSO READ: Bursting of England’s bubble shows how long the road to 2023 will be

Shorn of scheduled series against Bangladesh, Zimbabwe and West Indies, plus the postponement of the T20 World Cup, Australia’s Melbourne-based cricketers have had little else to do other than talk a lot between small-scale net sessions in Cricket Victoria’s Junction Oval base. For Maxwell and Finch, that meant hours to discuss exactly how the leader saw the role of his longtime friend and international team-mate.

Shuffled up and down the batting order ad nauseum, dropped and recalled, and also having taken a break for mental health reasons early last season, Maxwell was clearly in need of some simple instruction. As the many conversations rolled on, the desired description emerged – not unlike that traditionally assigned to a wicketkeeper. From No. 7, Maxwell would be able to counterattack when Australia were in a hole, while Finch reserved the right to promote him in the order if those above him were able to set the right launchpad for the final 20 or so overs.

“The really good thing is even in the lockdown period I was training with Finchy and we were able to talk about my role and certain things,” Maxwell said. “I just had so much clarity of what he expected of me in that role.

“I think I was able to take the game on, with the clarity he gave me before the tournament, and was able to ride on that momentum as well. Just knowing I had the backing of him is awesome. He’s been great for this group over here, he’s kept us all together, all 21 of us in the hub here, and he’s done a great job. Whether in the field or with his batters, he’s been outstanding.”

Finch had likewise articulated a specific, consistent role for Maxwell in his comments at the post-series presentation: “Maxi is in the team to do a specific role and that’s be able to take the game away from oppositions when you are having a good day but also be that guy who can counterattack and try and swing momentum. England had all the momentum at 5 for 70-odd and he dragged it back.

“That partnership with Alex was fantastic, I’m really proud of both of them, they deserve a lot of success and a lot of credit. Not just for this win but how hard they’ve been working on their game.

“What makes him [Maxwell] so damaging is he can play all around the ground, I don’t think there are many bowlers who can trouble him when he’s having one of those days but the way he navigated that innings, took it deeper and deeper, of course you have to take your chances chasing seven an over from a long way out and he did that perfectly. They fed off each other having the left-right hand combination, it was pretty special.”

So even amid the wreckage of Australia’s slide to 73 for 5 early in their innings, Maxwell had a clear head about what he was in the team, and in the middle, to do. It is the sort of mind frame in which he can do great things, whether it is for Australia, the Melbourne Stars or a host of domestic T20 teams overseas. Call it freedom, call it license, call it trust – it makes all the difference.

“I was probably thinking we haven’t got much to lose, so I had a bit of freedom to try and take the bowling on and put a bit more pressure on them,” Maxwell said. “I thought if I could make the most of that short boundary as much as I could early on and just back my bat swing, there was a fair bit of a breeze heading that way as well, so I just tried to get it up in the air and was able to get a couple pretty clean early on in the innings and then start to build a partnership with Alex.

“Coming it at 5 for 70, it’s probably hit or bust at that stage. I suppose just having heaps of trust in my own technique and trust in my partner at the other end, myself and Alex have had some good partnerships over the last few years, so really enjoyable to be with him at the other end.

“Then I knew once I started to get into the innings they’d start to bowl a bit differently to me and I might be able to cash in on some loose balls. Everything pretty much went to plan tonight, the way our partnership built was outstanding. I feel like I’ve always batted better for Australia when we’ve been in a bit of trouble, and to be able to get us through that and get us to a position where we could win the game was really pleasing.”

Maxwell had plenty of time and gratitude for Carey, who in eight ODI innings since the World Cup had cobbled 126 runs at 15.75, causing the likes of Adam Gilchrist to start talking up the prospects of the younger Josh Philippe. Carey had at least managed to make a start during the previous game, albeit amid Australia’s unseemly collapse, and brought a little momentum to the middle to build an Australian ODI record partnership for the sixth wicket.

“It ranks pretty highly. I really enjoyed the partnership,” Maxwell said. “Batting with Alex, seeing him get his first ODI hundred is pretty special, knowing how hard he’s worked. To see him get the rewards at the other end was extremely special, and to top off and beat the No. 1 team on their own soil was even more special. They didn’t really give him much to score on to the short boundary, and he had to work a little bit harder for his runs. I just thought the way he got through every challenge he faced, he was able to do it calmly and with great temperament the whole time.”

There will still be some fine-tuning for Maxwell and Australia. The most challenging thing for Finch will be to judge when is the best moment to unleash Maxwell amid an innings that is going well. But it is an easier problem to solve in an atmosphere of trust and confidence about Maxwell’s mindset.

Australia’s players now fly home, either directly or via the IPL, into a home season of many uncertainties, and with Melbourne still locked down. Plenty of certainty, though, was written all over the face of Maxwell, having finally sorted out exactly what he is in the Australian team to do, and do brilliantly.

What are MLB teams that are out of the race playing for the rest of the way?
Facial hair faceoff: Gardner Minshew’s mustache vs. Ryan Fitzpatrick’s beard
French Open crowd size cut to 1,000 due to virus
Warren: Lack of crowd could hinder Taylor
Neetu David to lead new Indian women’s selection committee