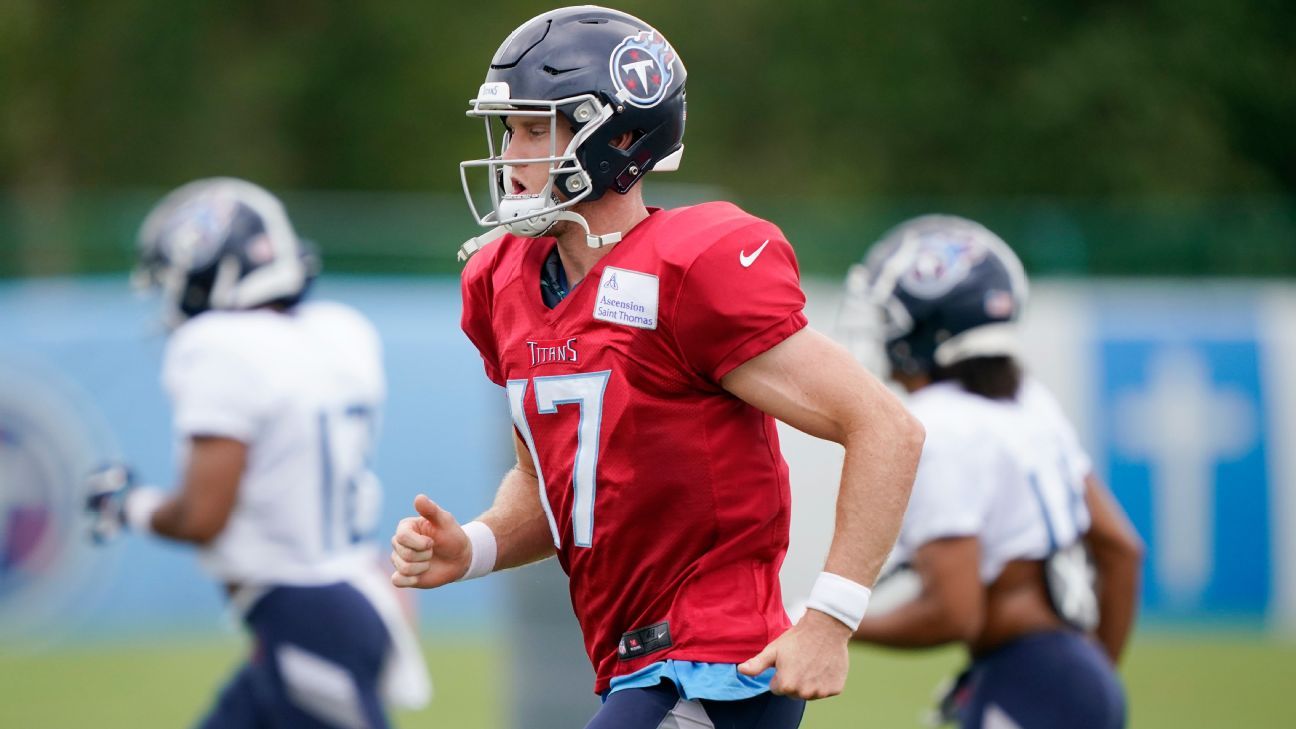 NASHVILLE, Tenn. — When quarterback Ryan Tannehill faces the Denver Broncos on Monday night (10:10 ET, ESPN), he’ll return to the scene where his career got a second chance.

A six-year starter for the Miami Dolphins, Tannehill came to the Tennessee Titans in 2019 as a backup. But after starting quarterback Marcus Mariota threw his second interception early in the third quarter of a Week 6 game in Denver, coach Mike Vrabel turned to Tannehill to give him a chance.

Although the Titans didn’t win that game, Tannehill never let go of the starting job.

“Ryan was an elite QB in this league not longer than a year ago,” former Titans tight end Delanie Walker said last October. “He can take over a team. He can make plays.”

With Tannehill at quarterback in 2019, the Titans scored 20 or more points in every game for the rest of the regular season. Their red zone percentage catapulted from 53.3% (19th) to tops in the NFL at 77.3% over that stretch. The Titans rode Tannehill’s hot hand — and some punishing running from Derrick Henry — all the way to the AFC Championship Game.

Becoming the starting quarterback didn’t mean Tannehill was just handed the leadership role. That had to be earned over time. Going into his second season in Tennessee, Tannehill has grown into the role of unquestioned leader of the offense.

“Ryan worked his way in there and played well,” Vrabel said. “And then as that comfort level began to grow, he really expanded his leadership and then took off in the offseason. I’d say it’s better now than what it was last year. They respond to him.”

Tannehill entered the NFL as the No. 8 overall selection by the Dolphins in the 2012 draft. He won the starting job as a rookie and started 88 games for Miami over six seasons. But after signing a six-year, $96 million contract extension in 2015, Tannehill missed 24 games over the next three seasons with knee and shoulder injuries.

The Dolphins ran out of patience and traded Tannehill along with a 2019 sixth-round pick in exchange for Tennessee’s 2019 seventh-round pick and a 2020 fourth-round pick. They even picked up $5 million of Tannehill’s guaranteed $7 million — in essence, paying a king’s ransom for Tannehill to leave.

The unfamiliar territory of being the backup was an adjustment.

“When you’re the starter, there’s certain things you’re able to do as far as leading,” Tannehill said during minicamp last year. “Taking a step back in a leadership role has been probably the toughest role for me.”

Tannehill laid low and bit his tongue at times in an effort to “know his role.” He observed his teammates so he could uncover the best way to lead them if he got the chance.

“I kind of got to take a backseat, and watch interactions, watch how the guys work, and now have a better idea how to lead them,” Tannehill said before starting his first game for the Titans.

Making Tannehill the starter in Week 7 last year was Vrabel’s attempt to “get a little spark” for an offense that scored a total of seven points in the two previous games.

The galvanizing moment for Tannehill came in Week 10 when he approached the huddle with the Titans down by five points at their 39-yard line with 1:21 left to play.

“Let’s go win it!” Tannehill said before scrambling for 18 yards to start the drive.

“When we stepped into the huddle, Ryan gave us a call,” tight end Anthony Firkser said. “… Ryan was being a great leader keeping everyone poised.”

A pinpoint pass to Adam Humphries resulted in a 23-yard touchdown that put the Titans ahead for good. Tannehill ran over a Kansas City Chiefs defensive back to complete the 2-point conversion in the win.

Tannehill showed his leadership through toughness in Week 14 when one of his passes got tipped at the line of scrimmage and intercepted by Raiders defensive lineman Maurice Hurst. Some quarterbacks take cover after an interception to avoid a big hit. Tannehill fought off a block by Raiders defender Dion Jordan and delivered a hard hit on Hurst, a 6-foot-2, 295-pounder, to prevent him from scoring a touchdown.

“He’s physically tough. The way he played, he was able to solidify himself as more of a voice,” quarterbacks coach Pat O’Hara said of how Tannehill became a leader on the Titans. “The leadership has been excellent. His approach every day is the same guy every day. When you’re the same guy every day with how you approach things, not just on the field, you build trust that way.”

Leaning on experience to help teammates

Tannehill played receiver for two seasons at Texas A&M before switching to quarterback his junior year. He finished with 55 receptions for 844 yards and five touchdowns as a redshirt freshman.

It’s safe to say he knows a thing or two about route running.

Often after a play, Tannehill will go to the receiver and discuss being more decisive or getting depth on a route.

“He’s always talking to receivers, whether it’s in meetings or right after the play,” Firkser said.

A.J. Brown jokingly said if the receivers aren’t where Tannehill wants them to be, he’s not throwing them the ball. Tannehill has been a steadying presence for Brown entering his second NFL season.

“He’s definitely a leader on the field. He demands what he wants,” Brown said during training camp. “You got to be in his right spot and he’s going to deliver a good ball. I would also definitely say it’s the influence off the field. How he talks to me off the field, in the locker room. Telling me to be a pro because there’s a lot of guys looking at me. He’s a great leader.”

Humphries recalled a time after practice during camp when Tannehill actually demonstrated how a route needed to be run against a particular coverage. The trust that receivers have in Tannehill allows them to welcome his input.

“He does a great job communicating what he wants in the details of our routes,” Humphries said. “As soon as the play is over, he wants to talk about it. Knowing how to approach us and talk is awesome.

“He played the receiver position so he knows the techniques at the top of the route that can create separation. He can relate to us. Having him with that knowledge, being a former receiver, it makes it a lot easier to communicate with him and be on the same page.”

The Titans signed Tannehill to a new four-year, $118 million deal in March. It capped a remarkable turnaround for a player who was essentially paid to go away by the Dolphins just a year before.

In a powerful example of how strongly the players felt about him, Tannehill was one of the players chosen to talk to the media when the Titans decided not to practice on Aug. 27 because they wanted to draw attention to systemic racism and social injustice.

Watch as #Titans QB Ryan Tannehill tears up while talking about why the team decided not to practice today. pic.twitter.com/lYyX3UKl73

He was also named one of the team captains by his teammates earlier this week. Now the ninth-year veteran gets the chance to reward his teammates’ faith in the same place where his ascent began on Monday night.

What are MLB teams that are out of the race playing for the rest of the way?
Leonard Fournette makes strong case for larger role with Bucs
Becker pleads not guilty to criminal bankruptcy
Ledesma confident Pumas will play Rugby Championship
NHL Playoffs Today: Keys to a possibly decisive Game 5