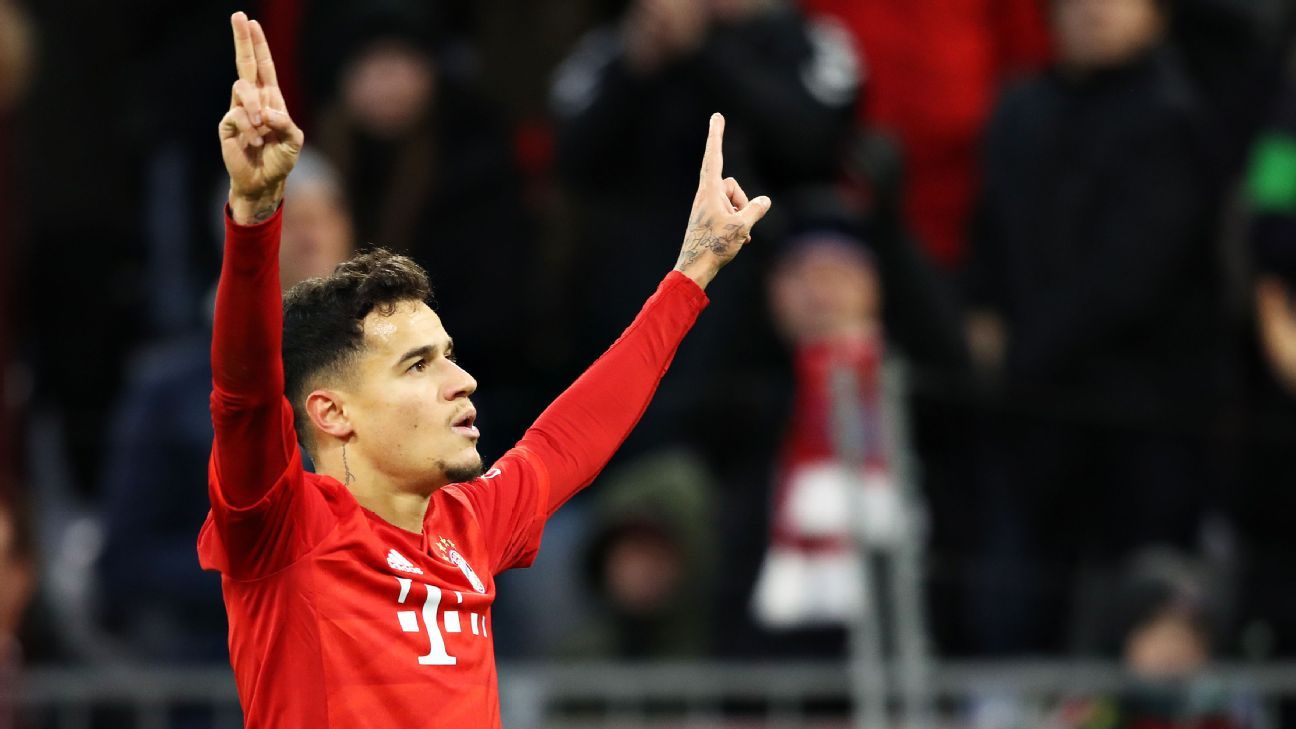 The coronavirus pandemic has made the transfer market uncertain — and you can find out when the windows open here — but here are the rumours floating around Europe’s big leagues and beyond.

Barcelona castaway Philippe Coutinho could be on his way to Arsenal for just £9 million — but only if Barca are able to get Matteo Guendouzi in the swap deal.

The Independent reports that Gunners boss Mikel Arteta could have the ex-Liverpool forward in his squad next term, after he spent a lacklustre loan spell at Bayern Munich.

Negotiations between Arsenal and Barcelona are in early stages, but victory in the FA Cup final against Chelsea (Stream LIVE/U.S. only: Saturday, 12:30 p.m. ET, ESPN+).will significantly add to Arteta’s budget and possibly pave the way for the deal.

A transfer is unlikely to be simple, though, given that Juventus are also interested in Guendouzi. The report states that Arsenal are exploring the possibility of a swap move with the Italian club also.

09.29 BST: Manchester United may be after Borussia Dortmund star Jadon Sancho but Bild reports that the German club are eyeing up a familiar replacement.

The 26-year-old winger has impressed in France and is reportedly ready to take the next step in his career.

09.00 BST: Napoli have completed the signing of forward Victor Osimhen from Lille, the club announced on Friday.

“SSC Napoli are delighted to announce the signing of Victor Osimhen from Lille on a permanent transfer,” the Italian club said in a statement.

Napoli president Aurelio De Laurentiis told Gazzetta dello Sport the deal is for a club record fee of €70m plus another €10m in bonuses.

ESPN FC Steve Nicol explains a few reasons why Nathan Ake might not be the right fit for Manchester City.

A week after Bournemouth‘s relegation from the Premier League, Cherries’ star striker Callum Wilson appears to be close to securing an exit from the Vitality Stadium.

The Telegraph reports that Wilson, 28, has told his teammates that he considers playing in the Premier League to be crucial if he is to build his international career.

Tottenham Hotspur are reportedly leading the race to prize Wilson away from Bournemouth, who are set to lose defender Nathan Ake to Manchester City for a whopping £41m.

Sky Sports claims that Everton lead the race to secure the services of Real Madrid left-back Sergio Reguilon, adding that an £18m bid has been placed for the 23-year-old.

Madrid fan-favourite Reguilon has attracted the interest of several Premier League clubs, but the Toffees’ latest bid could well tempt the Spanish club to part with their star academy graduate. Part of the reason behind Reguilon’s possible departure is finances, with reports that Madrid must raise £180m this summer to balance the books.

Meanwhile in Merseyside, Carlo Ancelotti wishes to sign Regulion as a replacement for the recently retired Leighton Baines.

– A not-so-warm Premier League welcome could greet Brentford if they beat Fulham in the Championship playoff final on Tuesday. That’s because club target Folarin Balogun — a 19-year-old striker at Arsenal — has been valued at £8m, according to Sky Sports. The Bees may see that as too steep a price for Balogun, is yet to make a senior appearance for the Gunners.

– Jeremy Ngakia seems to have raised some eyebrows at West Ham United as the youngster has reportedly decided to leave the side and join relegated Watford. According to the Guardian, the 19-year-old felt his future wasn’t at London Stadium and instead will try his luck with the Championship-bound club.