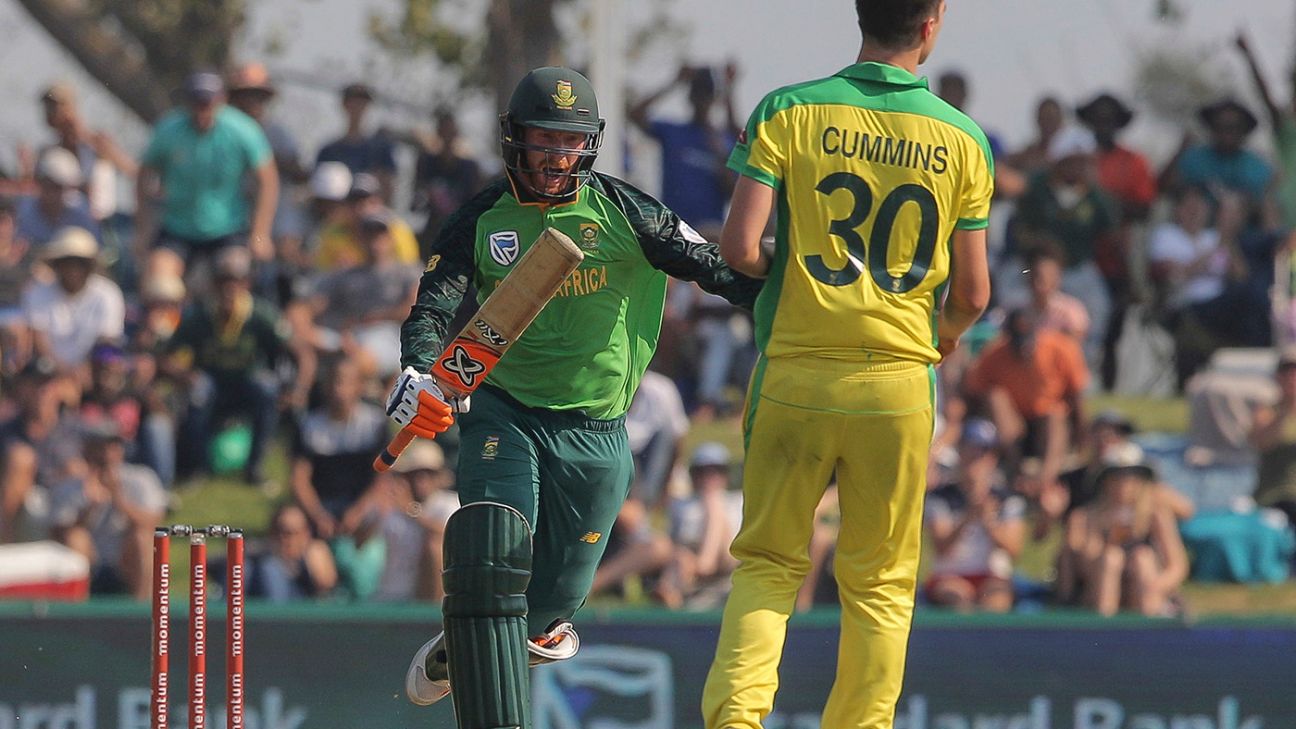 It was here at Boland Park that Heinrich Klaasen endured one of the worst days of his career. Two months ago, on the morning of December 16, he found out that he had been dropped from the South Africa Test squad ahead of the series against England after a torrid debut in Ranchi on their trip to India in September. That evening, the Mzansi Super League franchise he captains, the Tshwane Spartans, lost the tournament final to the Paarl Rocks.

Klaasen, who is not the most expressive character, cut a grim figure when he was asked about the compounding disappointments. “It’s not been a great week for me, but that’s part of the job,” he said then. “I need to go back and perform. I want to play Test cricket but there’s a lot of work that I have to do and put numbers on the board.”

Now, a little more than two months later, it’s was at Boland Park that Klaasen enjoyed one of the best days of his career with his maiden ODI hundred in his 15th match. Asked whether he could describe the feeling when the milestone came up, Klaasen shook his head and grinned. “No I can’t,” he said. “It’s difficult to put in words. It’s just pure emotion that came out.”

Measured, pure emotion. Klaasen’s celebrations, whether muted by the heat and smoke that hung in the air or by the knowledge that South Africa still needed a few more runs to get themselves into a properly dominant position, were quiet by most maiden hundred standards. There was no leap or air punch but a bat raise and a brief conversation with the heavens and then he was back in the zone, and continued to add to the total.

Klaasen finished on 123 not out, and his partnership with David Miller was worth half the final score. Crucially, it took the pressure off Quinton de Kock, who has been South Africa’s top-scorer in five out of the last six series and has come to be relied upon to do the bulk of the line-up’s work. “It’s not the Quinton de Kock show,” Klaasen said.”He is an incredible player but we can’t put all the pressure on them. The coach has been asking for someone else step up. Quinton can’t bat for 50 overs on his own.”

South Africa’s coach, Mark Boucher, was also Klaasen’s coach at the Titans for the past three seasons and it was under Boucher that Klaasen was earmarked as an international. He traveled with the Test squad on a tour to New Zealand in 2017, but only made his Test debut two years later, in India. The inevitable consequence of being on tour but not on the field was that Klaasen didn’t play a lot and when he was left out of the Test squad to face England at home, he was given the opportunity to put that right. “The selectors told me to go back to franchise and play more consistency; to spend a lot of time in the middle,” he said.

Though he has not hit the lights out, his numbers are steady. In the first-class competition, Klaasen collected 413 runs from five matches at an average of 51.62, which included four fifties. He has 162 runs from four one-day cup matches at 40.50, with one fifty. And then he got the call-up for the white-ball leg of the England series and made a big impression with 66 at his home ground, Centurion, to set South Africa up for a score of 222 for 6. That they couldn’t defend it was not Klaasen’s concern. He did his bit.

A hip injury prevented him from continuing to do it for South Africa’s next two T20 matches, but he was back in the XI as soon as he was fit, displacing allrounder Jon-Jon Smuts. That too tells a story. Instead of opt for a two-in-one player, South Africa have chosen Klaasen, demonstrating the faith Boucher has put in him. “It’s always good to know that your coach backs you,” he said. “We have got a good relationship, which changed in the last couple of months before he came up.”

Boucher’s promotion meant Klaasen lost a mentor of sorts but he has been working with other former internationals like Albie Morkel and Jacques Rudolph and has tried to model himself on one of his franchise team-mates, Dean Elgar – specifically an innings for the Titans against the Cobras earlier this month, when Elgar took the team from 50 for 2 to 302 for 4. Klaasen also had assurance from Boucher that he was doing the right thing on a surface where run-scoring was tough.

“The message came out from from the coach to say, ‘You are doing a good job,'” Klaasen said. “He said if we go three or four an over for the next 15 overs, he was happy. We didn’t have to worry about trying too many things, just take the low risk option.”

In doing that, Klaasen made it difficult for Australia to tie him down, according to their captain, Aaron Finch. “He picked his moments in when to attack the bowlers. They rotated, they ran hard, that was a quality knock.” And that’s high praise as any Klaasen could expect to get in Paarl.