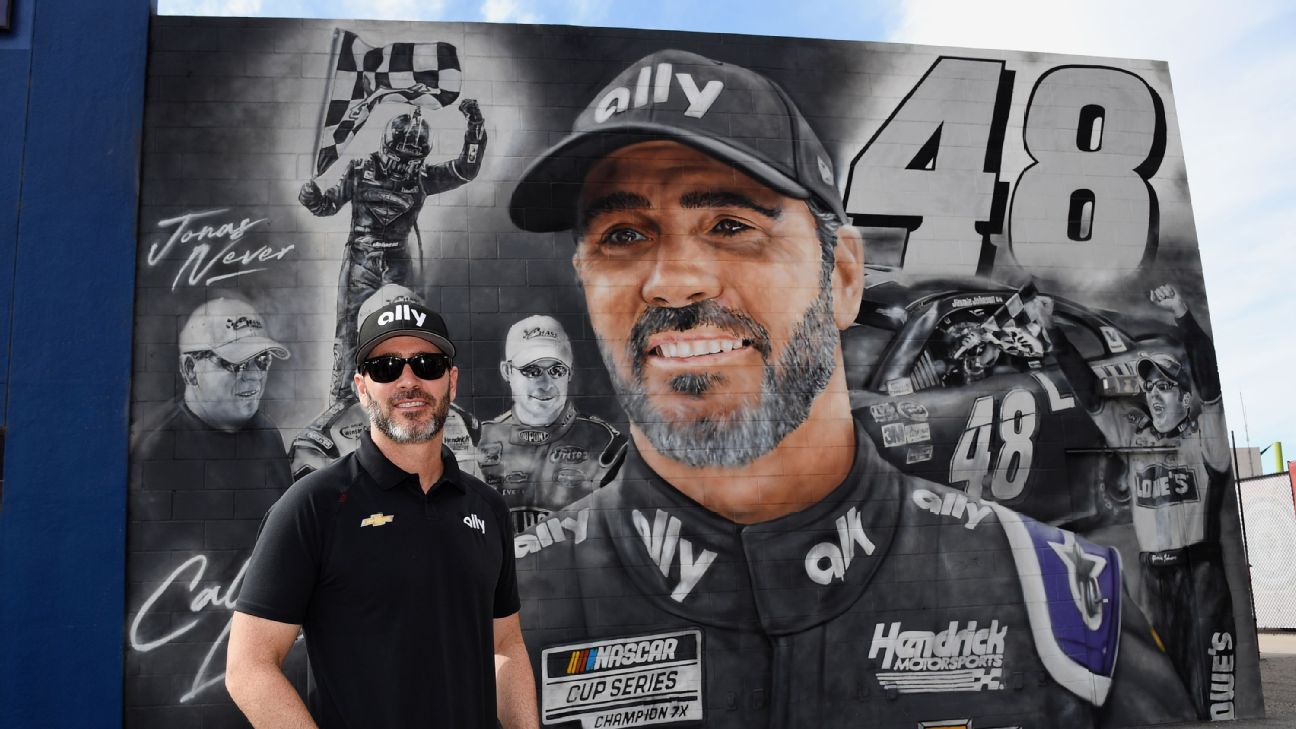 FONTANA, Calif. — So many of Jimmie Johnson‘s best racing memories occurred on this weathered California asphalt about 100 miles north of his hometown.

The seven-time NASCAR Cup Series champion is hoping to add one more incredible memory in his final start at Fontana.

Johnson is the king of Auto Club Speedway heading into the third race of his final Cup Series season as a full-time driver. The cool Californian has been the home favorite ever since he notched his first Cup win here back in 2002, and he eventually added five more trophies.

And after qualifying in an impressive second place Saturday, he’ll start on the front row with Clint Bowyer on Sunday as he goes for a historic finish in what’s likely his farewell to the home fans who have backed the California kid from the start.

“It would be insane,” Johnson said. “I’m very optimistic about this weekend. It would just be incredible to pull that off if we could.”

Johnson leads the Fontana record books with six victories, 980 laps led, 17 top-10 finishes, 13 top-five finishes and a 7.6 average finish. He has started 25 times here since that first win 18 years ago, and he has somehow finished every lap in every race.

After finishing fifth at Las Vegas last weekend in his Hendrick Motorsports Chevrolet, Johnson is allowing himself to think about a seventh win at Fontana. After all, he is already the only driver ever to win here in his 20s, 30s and 40s.

Fontana has put in plenty of effort to make a special weekend for Johnson. Images of his face and his cars throughout the years are plastered around the track on banners and murals. Johnson will lead the field in a five-wide salute to the crowd during the pace laps, while his friend and former teammate, motocross star Ricky Johnson, serves as the honorary pace car driver.

And then Johnson’s wife, Chandra, and daughters Genevieve and Lydia will drop the green flag.

“To come to my home track and see the effort that they put in to kind of honor me and my career means a lot to me, it really does,” Johnson said. “I feel a lot of support.”

Johnson wasn’t the first California driver to succeed in NASCAR, but he has long since surpassed the achievements of Dick Rathman, Ernie Irvan, Kevin Harvick and even Jeff Gordon to become the state’s biggest stock car star.

Johnson’s past is rosier than his present: He is stuck in a career-worst winless streak of 97 races.

So while Johnson can’t help thinking about the past during his special weekend, he is still grounded in the reality of day-to-day competition. His memories of his inaugural victory in 2002 are a bit more pragmatic than you might expect.

“That’s when I knew I was going to be employed,” he said with a laugh. “They told me they’d be patient and I had time, but in my heart I didn’t think that was the case, and I knew I needed to win. So to leave here with a trophy meant that I’d have a job for a few years, and I was pretty stoked about that.”

More things to watch during the race in the outer Los Angeles suburbs:

The first two races of the new Cup season were both won by their defending champions, so that’s good news for Kyle Busch. The overall series champion dominated last year’s race at Fontana, leading both stages and 134 laps on the way to his milestone 200th career victory across NASCAR’s top three series. Only Johnson has more wins at Fontana among active drivers than Busch, whose four victories include the first of his career in 2005.

Johnson is joined on the front row by Bowyer, who won only the fourth pole of his 15-year Cup career. Busch is back in 17th, while Martin Truex Jr. must start from the back after thrice failing inspection.

Ryan Blaney is feeling better about his role in the last-lap crash at the Daytona 500 that injured Ryan Newman. Blaney hit Newman from behind and sent him into the wall in a scary wreck. Blaney says he wanted to be alone last week, but his parents and friends reminded him of the inherent danger of their sport — and that he hadn’t done anything wrong. Blaney went camping in the desert to clear his mind, and he felt better after speaking to Newman by phone Wednesday.

“Even though it was unintentional and it’s racing, it still takes a toll on you when it’s off of your nose,” Blaney said. “You never want to see anyone get hurt in this sport. We are all competitors but we are also a big family.”

Blaney finished second at Daytona and 11th in Las Vegas.

Joey Logano won last week at Las Vegas, but he is among several veteran drivers who have never won on Fontana’s 2-mile track. Logano has repeatedly fallen just short, with four consecutive top-five finishes, but no victories in 13 career starts. A win at this tough venue would cement Joe Gibbs Racing’s dominance.